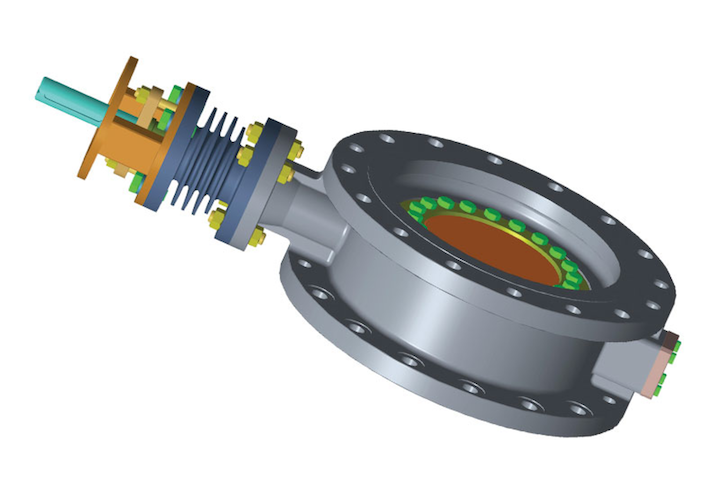 In the world of valves, no “one solution fits all” approach exists when it comes to sealing technology. Selection depends on a myriad of factors such as the media to which the seals are exposed, temperature, pressure and the leakage tightness required. In a process plant, several failure modes for valves are possible, including bonnet and flange leaks and leaks through the seat, but 77 percent of them are caused by stem packing leaks.1 Therefore, valve sealing solutions must be tailored to meet the specific application requirements. The solutions can range from selecting the right valve type and customizing bonnet design to installing the valve in a specific orientation.

Fugitive emission service – “Fugitive emission” can be defined as a chemical or mixture of chemicals, in any physical form, which represents an unanticipated or spurious leak from equipment on an industrial site and can be broadly classified as a volatile organic compound and hazardous air pollutant. The American Petroleum Institute‘s API 622 is the type test standard for qualifying process valve packing for fugitive emissions. Many valve type test standards exist for fugitive emissions such as API 624, API 641 and ISO 15848-1. These standards specify the performance criteria for the valve qualified such as number of mechanical cycles, thermal cycles, temperature and pressure and leakage tightness achieved.

Hydrogen service – Hydrogen is an unstabilized and combustible gas often used in combination with other hydrocarbons. Any media containing hydrogen gas with a partial pressure of 7 Bar and above will be considered as hydrogen service. Because hydrogen is very permeable, hybrid packings are preferred with live-loading. Reducing leakage by impregnating graphite with polytetrafluoroethylene (PTFE) is unacceptable since PTFE can evaporate in a fire with disastrous results.

Steam service – Valves used in combined cycle and supercritical power plants pose unique challenges to the stem seal selection. Combined cycle power plants involve high temperatures, high pressures, high Delta Ps and frequent “cycling” of valves because of load variations for plants that are not purely base-load plants. In coal-based power plants, plants operating above 24 millipascals (mPa) (3,480 psi)/593°C (1,100°F) are regarded as ultra-supercritical (USC), and those operating below 24 mPa (3,480 psi) as subcritical.2 For these applications, graphite packings without PTFE and binders are most suitable. These graphite packings could also have an oxidation inhibitor and, optionally, be live-loaded to compensate for frequent thermal cycling.

Oxygen service – When designing a valve for oxygen service, it is important to identify potential sources of ignition and the factors that aggravate propagation because all three elements – oxygen, fuel and heat (source of ignition) – are required to start and propagate a fire. As nonmetals form an important part in the kindling chain in an oxygen system, gland packings and other nonmetallic seals are chosen for design temperature-pressure conditions based on tests conducted for autogenous ignition temperature, aging resistance, ignition sensitivity to gaseous oxygen and liquid oxygen impacts.

As per API RP 615,3 high-temperature service is typically defined as a service with a temperature higher than 205°C (400°F) for soft-seated valves and 400°C (750°F) for metal-seated valves. Low-temperature service is generally defined in the process industry as services that range from -196°C (-320°F) to -30°C (-21°F). These services include liquefied natural gas liquefaction and gasification, natural gas liquid production and ethylene production. While temperature determines the thresholds for the use of nonmetals/metals as seals, pressure determines the permeability and extrusion behavior of seals over time. Graphite packings are reinforced with Inconel to give the blowout proof strength.

External leakage tightness can either be expressed in parts per million (ppm) or flow rate. Different standards specify leak tightness for valves. API 624 and API 641 are standards for 100 ppm fugitive emissions for rising and rotating stem valves, respectively. ISO 15848 has methane and helium leakage classes and can be extended to isolation and control valves. Valve stem seal selection depends on whether the intended leakage class is Class AH, BH or CH. In a rising stem valve, Class AH would require a metal bellows while Class BH would require a live-loaded low fugitive emissions packing.

For lower or higher temperature services, the bonnet arrangement/installation could be changed to ensure that a conventional graphite packing system works for the desired temperature and pressure. The heat dissipation length has two functions: to clear the lagging and to have sufficient length outside the lagging to dissipate the heat so the graphite-packing skin temperature remains in an operable range.

Extended bonnet lengths for low temperature are covered in standards such as BS 6364 and MSS SP-134 that address low-temperature/cryogenic applications. Shell MESC SPE 77/212 is a specification that covers “valves in high-temperature services.” This specification suggests that for valves for temperatures above 450°C (842°F) the length of the extension shall be sufficient to maintain the stem packing at a temperature less than or equal to 400°C (750°F) to minimize the potential for the oxidization of graphite, which can affect the valve’s performance.

A bellows-sealed valve is designed with a metal bellows that expands or contracts with the linear stroke of the valve while providing a solid, permanent barrier between the fluid medium in the body and any potential leak paths to the atmosphere. The purpose of a bellows seal is to provide a metal barrier between the stem at its point of entry through the pressure boundary and the process fluid within the valve to eliminate stem leakage.

At present, graphite is a popular packing material for all general sealing applications in the form of gasket and packing rings. The service temperature limit of graphite packing rings has precluded its application for high-temperature services above 450°C (842°F) in oxidizing atmospheres. Conventionally in such high-temperature applications, bonnet extensions are provided in valves that ensure the temperature at the packing remains below 450°C (842°F). However, the use of bonnet extensions becomes prohibitive in some cases where end users want compact piping layouts.

The packing material/configuration selected would have to be stable at high temperatures without any deterioration in the chemical properties and still achieve sealability at elevated temperatures. Following are the sealing materials considered for high-temperature applications:

Spring-energized metal seals made from Inconel can work up to 700°C (1,292°F), though the finish and hardness requirements of the stuffing box and stem could be demanding.

In valves, the concept of independent sealing barriers has been in use for a long time. Primary and secondary stem seals were first used in plug valves and later in ball valves where the primary seal is responsible for leak tightness while the secondary seal is merely a fire-safe seal when used in process applications. However, with the demands for low-emission valves, or Low-E valves, stem seal configurations have changed where a number of independent barriers are used in conjunction to create a leak-tight seal. Examples of multibarrier seals are given in Table 2.

K.S. Patil is head – product design, research & development, at L&T Valves Limited. He holds a Bachelor of Technology (B.Tech) degree in mechanical engineering. He has more than 30 years of experience in the valve industry. He is responsible for design and development of industrial valves of different types. He holds nine patents related to valves.

Jaisingh Jadhav is senior deputy general manager – business development and heads the North American business of L&T Valves Limited. He holds a Bachelor of Engineering degree in mechanical engineering and has worked with L&T for 24 years.

Ram Viswanathan has 12 years of experience at L&T Valves in different engineering roles in valves design, research and development and reliability engineering. He holds a Bachelor of Engineering (B.E.Hons.) degree in mechanical engineering, is professionally registered as a CFSP (Exida) and as an Incorporated Engineer (ImechE).