In a coal pulverizing line there are billions of coal particles that collide with a hard-faced thermowell at high velocity resulting in a phenomenon commonly referred to as solid particle erosion (SPE). Here we examine an attempted solution to this problem. 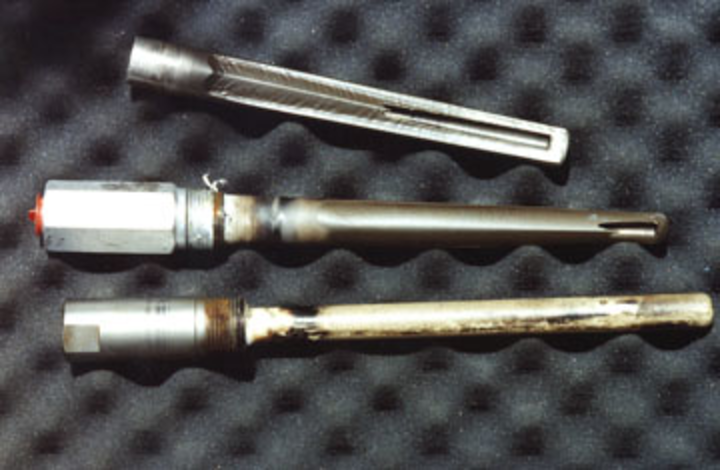 Imagine a thermocouple-thermowell assembly installed in a coal pulverizing line.  The coal in the line is about the consistency of baby powder and is being conveyed at high speed toward combustion. The temperature measurement obtained in this application is used for control of the process.

A proportional, integral and derivative (PID) control system is at work, doing all kinds of fancy things like anticipating the lag in the response time of the temperature sensor and making adjustments on the fly to conserve energy. To this end, the well-meaning manufacturer of the coal pulverizing equipment has thoughtfully supplied a thermowell that is hard faced with a cobalt material that is famous the world over for its resistance to erosion. Technology is a wonder; we are living in the age of miracles and life could not be finer. Or are we?

The Effects of Solid Particle Erosion

Although hard facings resist erosion much better than raw steel, these facings are commonly applied as a flame spray or plasma spray or weld. The surface is then polished and perfected so that to the naked eye there are no visible imperfections or blemishes. The challenge? In this coal pulverizing line there are billions of coal particles that collide with this hard-faced thermowell at high velocity resulting in a phenomenon commonly referred to as solid particle erosion (SPE).

When you are dealing with billions of iterations of contact between the small solid particles and a thermowell shank, sooner or later one or three or several hundred of these very small particles will make contact with the slightest irregularity in the facing on the thermowell. Repetition of the interaction will aggravate the irregularity until the irregularity becomes a breach of the hard facing at which point the underlying steel becomes directly exposed to the flow of the coal powder. Material loss inevitably ensues. In practice, despite appropriate hard facing, a thermowell can lose the half of its shank that is directly exposed to the flow of pulverized coal every three to six months.

So what is the logical solution to this dilemma? Hard facings are expensive, and the urge to use every part of the thermowell is compelling. Why not simply flip the thermowell around 180 degrees so that the section that has not worn off is now exposed to the flow of the coal powder? That works until one day a maintenance worker goes to turn the thermowell around and there is no thermowell left to turn.

The three thermowells in Figure 1 were each installed into a coal pulverizing line where the major length of the thermowell shank was directly exposed to high velocity small particle erosion. The top two wells were coated with a cobalt-based hard facing to increase the lifespan of the thermowells. Although the hard facing material is much harder than steel, the coating process leaves microscopic imperfections or cracks, which are inevitably revealed in a process where billions of grains of powder are blasted against the thermowell shank. Once the imperfection is exploited by the coal powder, bare metal is revealed and the thermowell quickly erodes as demonstrated in Figure 1.

The top two thermowells had been installed in the thermowell line for six months and three months respectively. Each was hard faced, and solid particle erosion completely opened their shanks. The thermowell at the bottom was a child of necessity and was installed in the coal pulverizing line for more than a year. Prolonged exposure to the flow of pulverized coal caused no damage to the thermowell or the reliability of the temperature measurement obtained from this installation.

A Viable Alternative to Hard-Faced Thermowells

The solution identified was to utilize a solid ceramic with a metallic support structure. Because the ceramic utilized was a solid (≈ .125” thick) rather than a facing, it did not have the imperfections existing in a coating. The resulting difference in performance was dramatic. Protection tubes manufactured in this manner, such as the one at the bottom of Figure 1, have lasted for six years and more without failure at less than half the per thermowell cost of the hard-faced thermowells, which rarely lasted six months in the same installation.

However, more important than reduction in the cost and replacement frequency of the thermowell was the improvement in the reliability of the response time of the obtained temperature measurement.

When Erosion Is a Concern
Erosion concerns are far from unique to coal pulverizing lines. Where erosion is of concern, the thickness of the material can be just as significant as the performance hard facing that is applied. Where a temperature sensor is being used for control of process characteristics, the impact of erosion can be extremely significant—the change in response time potentially far outweighing the costs associated with removing and replacing the eroded component. There are many similar phenomena at work in power, chemical, petrochemical, and industrial applications where sand or other small particles can cause parts to quickly wear and lose functionality.

One final note: the ASME has published a wake frequency standard (PTC 19.3TW-2010) that addresses the mechanical integrity of a thermowell. While the standard permits quantification of material loss for a thermowell, it does not quantify the impact on temperature measurement. Moreover, the ASME standard unequivocally states that thermowells with hard-faced coatings are outside the scope of a 19.3TW analysis, as are “protection tubes,” which are commonly used in these applications. In such cases, the appropriate design strategy is to focus on avoidance of the actual cause of failure—erosion—rather than a hypothetical cause of failure such as velocity-induced vibration.

Mitch Johnson, J.D., is the president of JMS Southeast, a manufacturer of custom temperature sensors and thermowells based in Statesville, N.C. Mr. Johnson is a member of the ISA and serves on the ASTM E20 Committee, the ASME 19.3TW, 19.3 and 40.9 Committees. Recently, he co-authored “Practical Thermocouple Thermometry” (2nd Ed.), and was named a “Control Engineering Leader Under 40.” He also recently served as Principal Investigator for the EPRI publication: Thermowell and Radiographic Testing Plug Design Recommendations and Typical Practices. He can be reached at mjohnson@jms-se.com.

Top-10 Most-Viewed Articles of 2013 On FlowControlNetwork.com

The global market for temperature sensors is projected to reach US$4.5 billion by 2018, primarily driven by the growing use of the technology in a wide range of industries, particularly petrochemicals.
Staff
Mar 20th, 2013

Highlights and resources from around the Web for fluid handling and flow control.
Amy Richardson
Feb 22nd, 2013

Here are brief summaries of the video content we’ve added to FlowTube over the past month, with direct links to the video player page so you can watch what you want.
Matt Migliore
Feb 1st, 2013

A Primer On the New PTC 19.3 TW Thermowell Calculation Standard

There’s been a change in the thermowell calculation standard, performance test code (PTC) 19.3. After years of development, PTC 19.3 TW is the new standard. The following video offers a primer on the details of the new PTC 19.3 TW specification and explains what it means for thermowell users. Brought to you by: Emerson Process Management, Rosemount Division
Staff
Jan 29th, 2013

Test your temperature measurement knowledge with these terms and definitions from Endress+Hauser.
Staff
Jan 21st, 2010