An OEM manufacturer of hydraulic testers for measuring the strength of materials recently adopted Ashcroft’s DG25 pressure gauge to measure units of force in a critical testing scenario. 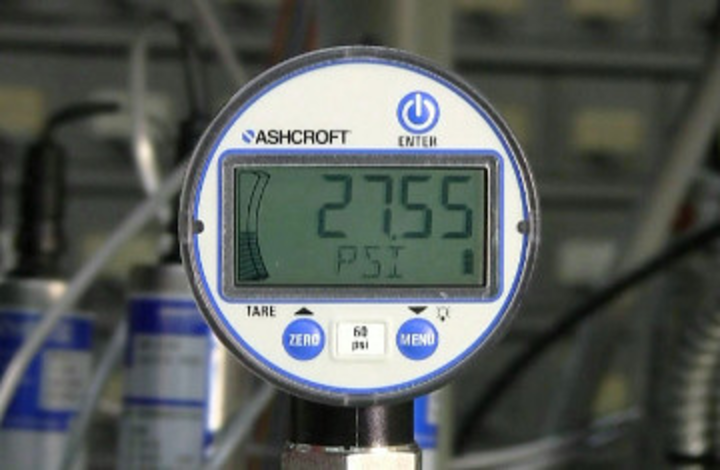 The following is part of a "Case Studies In Innovation" series of blog posts we will be running on the FlowStream Blog in the coming weeks to highlight winners of the 2013 Flow Control Innovation Awards program. An OEM manufacturer of hydraulic testers for measuring the strength of materials recently adopted Ashcroft’s DG25 pressure gauge to measure units of force in a critical testing scenario. In this application, the DG25 displays the maximum force applied before failure of the material under test. 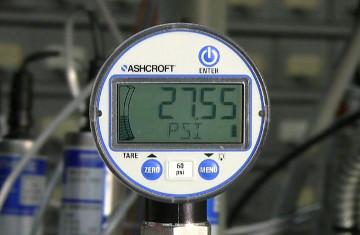 Ashcroft was able to completely customize its standard DG25 pressure gauge to suit this unique industry and application, leveraging its position as the sole owner of the hardware and firmware for this product, as well as its on-site production and design engineering services. The customization included multiple different engineering units and a “max-hold” feature, which saves and displays the maximum force applied at the point of material failure.

This particular OEM also required the removal of some programmable features from the menu, while other programmable parameters needed to be factory set and not field adjustable. One example of the removed functionality was the tare function, as it is not necessary for this particular application, and Ashcroft engineers disabled this option per the customer’s request.

In addition to creating custom application firmware, Ashcroft also created a custom overlay artwork, including the OEM’s logo and color scheme. This made the gauge truly unique in features, functions, and appearance.

During the specification process, Ashcroft worked closely with the OEM’s design engineers to collaborate on the product specifications and to obtain a clear understanding of the application and requirements. By sending a sample Ashcroft DG25 gauge at the onset of the project, Ashcroft and the OEM were able to work together to specify necessary changes and expected deviations from the standard product. Once both parties had agreed on the OEM specifications, Ashcroft’s software engineers went to work modifying existing firmware and writing new custom sections of the firmware to meet the requirements of the application.

In parallel to the updated firmware, Ashcroft’s graphic designer collaborated with the OEM’s graphics group to get artwork and color schemes to create a new custom gauge front panel overlay.

Once the firmware work was complete, prototype gauges were shipped to the OEM for test and evaluation. As commonly found in most design projects, the customer’s testing found a need for some minor changes, including user interface changes and additional display messages. Ashcroft worked with the customer through the test phase to ensure the solution met their specific requirements. After multiple rounds of testing, Ashcroft and the OEM were able to finalize the solution.

In this application the customer found that reading an analog gauge quickly and accurately had proven to be a challenge. By displaying the measurement in large LCD display characters and saving the maximum value (pressure at failure) until the gauge is reset, the DG25 provided a solution that was easy to read and left no doubt about the maximum pressure at failure. The DG25 also provided the OEM superior durability, water ingress protection (IP67), and extended battery life (2,000-plus hours).

The most important performance advantages the DG25 gauge offered in this application were ease-of-use and the ability to program the gauge at the OEM’s factory to work with different test ranges, which meant only one customizable DG25 model had to be stocked and inventoried.

The DG25 was also used on a new version of the OEM’s tester, and usage of the product has continued to increase. Ashcroft hopes that the OEM’s positive and productive experience in developing this gauge will provide more opportunities to work new product development projects going forward.

How to calculate the real-world accuracy of a pressure measurement device
Tom Halaczkiewicz and Patrick Klima
Feb 28th, 2012

Baumer’s industrial pressure gauge MEX5 is designed for use in corrosive atmospheres and fluids. The gauge, with its diameter of 100 mm, comes with a special dashpot for vibration resistance that,
Staff
Apr 18th, 2011