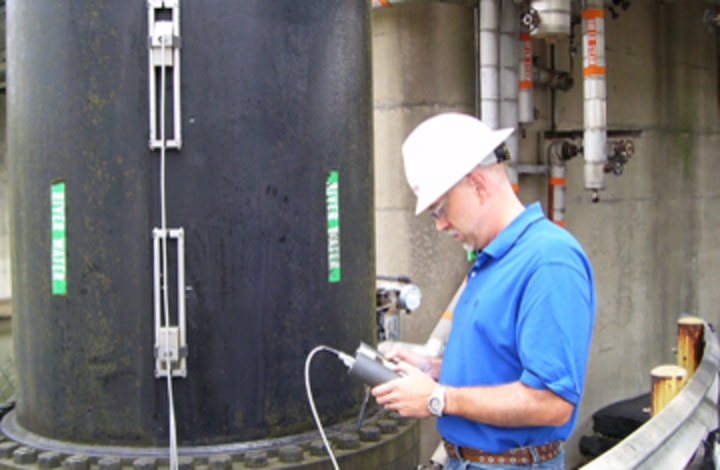 Greg Harper, environmental and process analysis manager at Eastman Chemical’s Kingsport, Tenn. facility, recently evaluated clamp-on ultrasonic flowmeters as a potential solution for alleviating the accuracy and consistency issues it was experiencing in some of its applications. The evaluation involved revisiting clamp-on ultrasonic meters after some prior, uneven results with the technology.

In Search of a Flow Measurement Solution

“The need for accurate, representative flow data that we could archive and access has been increasing exponentially, but there was nothing in place that could provide all the information we needed,” said Harper. “Several internal development and engineering groups had looked into clamp-on ultrasonic flowmeters with data logging capability, but nothing had been expanded to the company as a whole.” Those who had the ultrasonics had varying degrees of success with older platforms of the meters, but for the most part the meters were collecting dust on a shelf.

The problem, according to Harper, was accuracy. In discussing the technology with his colleagues, Harper said he heard, “We’ve had a clamp-on ultrasonic for years, and I’ve never had much success with the thing.” And, “Clamp-on meters are very frustrating to use; you never know if they are giving you accurate readings, if you actually get any readings at all.”

Clamp-On Ultrasonic Flowmeter Technology Revisited
Harper said he believed in the potential of clamp-on ultrasonic flowmeters, but what he was hearing required further evaluation before a decision could be made.

Harper invited representatives of all the ultrasonic meter manufacturers he could identify to come to his facility and demonstrate their meters in a variety of circumstances. Eleven accepted the challenge.

Harper identified 20 points throughout the plant. Several were in the coal gasification plant because it transports gasses and liquids and slurries of changing consistencies and temperatures. All of the selected sites had existing meters that had recently been calibrated.

“My first test for all the meters was in the parking lot where we have a 30-inch waste line,” said Harper. “Aside from accuracy, I was looking for ease of installation. After all, I have to go all over the plant measuring flow, and I don’t want to waste time setting up.” Harper said he was also looking for reliability, data logging capability, diagnostic tools, and a good battery life. “The thing with the waste line was that if it took too long to set up the meter or the accuracy wasn’t there on such an easy task, there was no point going into the other test sites,” said Harper. “Five meters didn’t make it out of the parking lot. As for the other six, some could measure liquid and not gas and vice versa. Some had trouble with slurries.”

In the end, Harper settled on a portable clamp-on from Flexim. “They had two distinct advantages over the others,” said Harper. “First, they were a combination gas/fluid meter, so I only had to buy one meter, not two. Second, their installation is a snap. The main problem with the others was installation.”

The Flexim meters have a fixed frequency on the transducers—it doesn’t matter what they are measuring, they keep that frequency. The other meters evaluated by Eastman used a sweep frequency, which may take quite a bit of time to set up and put on the pipe. Further, sweep frequency meters typically need to find a “sweet spot,” and even after this spot is found, you still have to adjust the transducers to get an accurate measurement.”

“There are many ways of getting a signal to a pipe,” said John O’Brien, general manager of Flexim Americas Corporation. “Many use multiple transducers which operate at different frequencies to overcome the various types of pipes and wall thicknesses and types of liquids. We use the same transducer for everything, but we filter the transmission pattern and either increase the power to the transducer, or break up the pattern of transmissions to adapt to the real-world conditions.” The power to the transducer may go from 15 volts transmit to 90 volts transmit. The Flexim meters send approximately 1,000 pulses back a second in 500 pairs, and the system automatically realizes a change in the consistency of the liquid. This mode of operation can even support coal slurries, as the meters are capable of automatically realizing signal loss and increasing power to the transducers. It’s a combination of software, clever transducers, and signal processing. It can monitor anything from quarter-inch tubing to a 30-foot penstock.

“I think we can safely say that ultrasonic flowmeters have finally met their potential,” said Harper. “I have taken more than 600 readings with [the Flexim] portable meter, and my success rate is 99.8 percent; and that includes pipes containing acids, water, gasses, and slurries at several hundred degrees. At the end of the day, I collect all the data dumps from the built-in data logger and export it to my spread sheet program.”

This blog post is an excerpt from a larger two-part case study on clamp-on ultrasonic flow measurement that will be published in the March issue of Flow Control magazine. If you are not yet a subscriber to Flow Control magazine, you can register for a free subscription here.

Izzy Rivera has been involved with R&D of Clamp-on Ultrasonic Flow Metering for over 30 years. He has traveled extensively as a field engineer, and has been involved with development; from the early days of inception of clamp-on metering to the vast improvements that now make it possible to measure gas from outside the pipe. His home base is at Flexim Americas Operations Center in New York. At Flexim Izzy is responsible for managing technical service, product management & development for the Gas and HVAC markets.

Researchers Investigate Use of Alumina Blocks in Ultrasonic Flowmeters

With the piston prover a known volume of water is “pressed” through the flowmeter under test. This is performed via a dedicated calibration system. When the calibration has been completed successfully, a calibration certificate is issued. Brought to you by KROHNE
Staff
Dec 19th, 2014

Growth in the energy markets is a major factor driving growth in the ultrasonic flowmeter market.
Jesse Yoder
Dec 16th, 2014

David W. Spitzer offers the latest in his ongoing series of articles focused on a problematic reactor measurement affected by ammonia bubbles. The solution is getting close.
David W. Spitzer
Nov 6th, 2014

The Importance of Dynamic Flowmeter Testing

Part VII: How Bubbles In a Control Valve Affect the Downstream Flowmeter

Not only do FLEXIM’s flowmeters save the day in real-life applications, but one particular flow solution is now saving the day in the new epic Hollywood film “Dawn of the Planet of the Apes.”
Provided FLEXIM AMERICAS Corporation
Aug 21st, 2014

A video overview highlighting the features and quick-setup capability of GPI’s new QStar ultrasonic flowmeter. Brought to you by www.gpimeters.net
Staff
Aug 3rd, 2014

As interest in biogas grows, more attention is being paid to measuring biogas flow, which has long been a challenging process measurement.
Provided KROHNE, Inc.
Jul 10th, 2014

The market for ultrasonic flowmeters totaled $632 million in 2011 and is projected to grow at a compound annual growth rate of 9.6 percent through 2016, according to a report by Flow Research.
Staff
Jun 11th, 2014

BOTAS recently installed a natural gas pipeline allocation system at its natural gas compressor station at Çayirli, a town in the Erzincan Province of Eastern Turkey. The system included a 42-inch ultrasonic flowmeter, one of the largest in the world.
Mehmet Duzen
Jan 31st, 2014