Understanding when and why mass flowmeters need to be calibrated 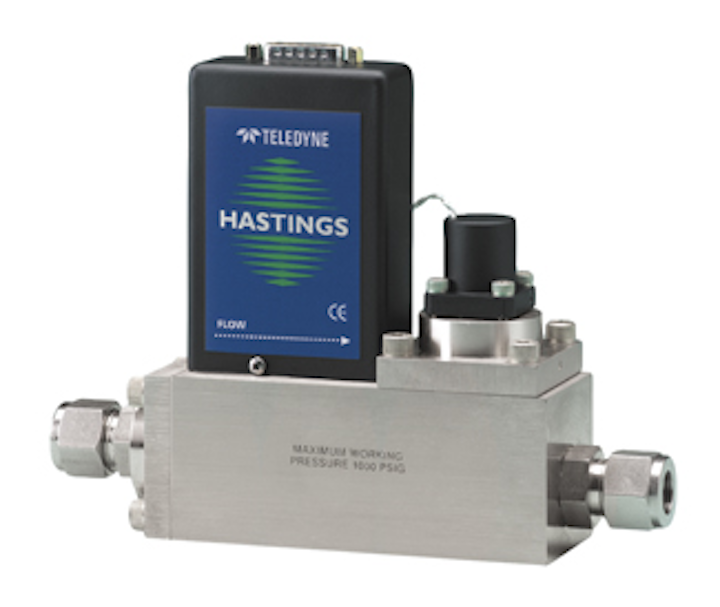 Thermal mass flowmeters (MFMs) and mass flow controllers (MFCs) are widely used throughout laboratories and industry in situations requiring precise control of gas flowrate. The MFC shown in Figure 1 can control a wide variety of process gases with flowrates up to 1000 SLPM and pressures up to 1000 PSIG. Mass flow controllers are often used to supply inert and other gases into semiconductor processes and laboratory reactors, as shown in Figure 2.

In order to calibrate these devices precisely, it is accepted good practice to control the outlet pressure of the devices in the same range as the application pressure. This article describes how a sensitive dome-loaded backpressure regulator (BPR) can improve the quality and efficiency of the MFC and MFM calibration process.

For all but the smallest MFMs, the flow sensor is situated in a small side stream of the overall stream flow, and a laminar flow divider is typically used to provide reliable scaling from the small side-stream flow sensor to the overall flowmeter stream (Figure 3). For example, a 100-to-1 laminar flow divider would divert only 1 percent of the stream gas flow through the heated sensor, but the resulting flow signal would be multiplied by 100X to project the overall stream mass flow.

Mass flow controllers are similar to MFMs, but also control the gas flow by using a flow control valve downstream of the flow sensor (Figure 4). These MFCs are extremely popular in small-scale research reactors because they allow the user to simply input the desired mass flowrate through an analog or digital command signal, with the actual mass flow signal returned to the host computer. In an MFC, the flow sensor is exposed to the inlet supply pressure.

Although the fundamental principle of thermal MFMs suggests they can read mass flow regardless of gas pressure and density, in practice there is a small effect of gas pressure on the output of these devices. The ratio of flow signal variation per unit pressure change is expressed as the Pressure Coefficient; a typical Pressure Coefficient is in the range of 0.01 percent/PSID. Though this number appears small, for a high-pressure reactor application where the MFM might experience a pressure change from 500 PSI to 900 PSI, the resulting mass flow reading variation would be 4 percent (400 PSID x 0.01 percent/PSID).

Back pressure control for MFM calibration

Figure 5 shows how a back pressure regulator can be used to aid in the calibration of an MFM. It allows the MFM to be calibrated at the desired pressure to avoid any effects from the Pressure Coefficient. Both flowmeters are exposed to the specified calibration pressure. A flow control valve controls the flowrate.

Back pressure control for MFCs

For MFCs, a BPR installed downstream can also be useful in improving the accuracy of calibration and tuning process, though for different reasons. Because the MFC has a control valve built into the downstream of the instrument, the flow sensor itself sees the inlet supply pressure, not the exit pressure. However, the capacity and tuning of the control valve is dependent on having a specified differential pressure across the MFC. Let’s take as an example a laboratory process with a Nitrogen supply of 2,000 PSIG, with the MFC discharging into a 1,200 PSIG reactor. The control valve is sized and tuned for an 800 PSIG differential. While it may be possible to calibrate this instrument with an atmospheric discharge pressure (2,000 PSIG differential), it is preferable to calibrate and verify both the flow sensor and the control valve by emulating the actual process conditions.

The back pressure regulator can be installed directly downstream of the MFC being calibrated, as shown in Figure 6. Where the flow standard is a MFM, both the MFC being calibrated and the MFM flow standard can be installed upstream of the BPR, as shown in Figure 7. This arrangement allows the user to fully replicate the process conditions during the calibration and tuning process.

Although the required pressure control could be accomplished by using traditional back pressure regulators, the wide flow ranges typically encountered on a calibration bench might require switching between several different BPRs to provide precise pressure control. For example, a given MFC might have a flowrate range (max/min) of 100-to-1. However, a typical laboratory might have two or three ranges of MFCs installed, requiring a calibration technician to control back pressure through ranges from several standard milliliters/minute (std. ml/min) to hundreds of standard liters/minute (slpm).

A new type of dome-loaded BPR has been recently introduced, allowing for a much wider flowrate range while also offering extremely tight pressure stability. These qualities are designed to help improve the efficiency and stability of the MFM and MFC calibration process.

The BPR requires a 1-to-1 setpoint reference pressure to be applied to its dome. A simple air or gas pressure regulator is often used for this purpose, as is shown in Figure 8 (upper regulator). This dynamic gas loading helps provide the high-pressure stability across the wide flowrate ranges.

The patented technology allows for min/max flow ratios of 1000-to-1 and, in some cases, greater than 10,000-to-1, while maintaining the inlet pressure within a 1-2 percent precision window. This is a dramatic improvement over traditional spring-loaded BPRs, which can exhibit as much as 30 percent pressure variation across flowrate ranges as narrow as 10-to-1.

A multinational fuel cell development company reports significant benefits to their MFC calibration program by incorporating the aforementioned BPR, manufactured by Equilibar. By installing the BPR downstream of its MFC, the company is able to very quickly replicate the exact process conditions of the MFC (both inlet and outlet pressures). Prior to installing the Equilibar BPR, the company had tried both needle valves and PID actuated control valves to provide the required back pressure control. The PID control valve process required significant tuning and settling time in order to properly control the back pressure. Very low flowrates were also problematic. Although the needle valve is a reliable method of applying back pressure, it required tedious adjustment for each data point of the calibration process.

After installing the back pressure regulator, the calibrating technician was able to immediately record the data as soon as the flow standard reading was achieved, with no delay or manual adjustment. This client reported an average time savings of 30 percent during the overall calibration process, with certain configurations offering time savings up to 70 percent. The fuel cell developer also observed an improvement in the overall accuracy of the calibration process due to the lack of pressure drifts between different flow settings.

Figure 9 shows how the BPR was installed before an atmospheric flow standard in order to simulate reactor pressure conditions on the MFC. Where an MFC calibration standard is available, the fuel cell client also utilized the BPR downstream of both instruments, as shown in Figure 7 previously.

Jeff Jennings, P.E., is founder and president of Equilibar LLC, a provider of high-precision pressure control solutions. Prior to Equilibar, he worked as a process development engineer for 23 years. He is a licensed professional engineer in North Carolina and holds several patents. Mr. Jennings can be reached at jeff.jennings@equilibar.com or 828-650-6590.

Mass Flow Converter App Puts the Answers at Your Fingertips

How Mass Flow Controllers Are Making Their Mark In Industry

Choosing the Right Mass Flow Controller for Your Application

Is there a requirement for onshore and offshore oil & gas exploration companies to monitor and report daily volumes of flare and vent gas under environmental regulatory mandates? The answer to that question is a definite yes
Chris Boss
May 27th, 2014

Which of the following flowmeters measure the mass of the fluid passing through the flowmeter?
David W. Spitzer & Walt Boyes
May 9th, 2014

MASS FLOW CONTROLLERS: Broadening the Application Base Beyond Semiconductor

One important development that is occurring in the mass flow controller market is that a number of companies that supply the semiconductor market are now looking also at industrial applications.
Staff
Dec 30th, 2013

Broadening the Application Base Beyond Semiconductor

One important development that is occurring in the mass flow controller market is that a number of companies that supply the semiconductor market are now looking also at industrial applications.
Jesse Yoder
Dec 15th, 2013

What Can You Do with a Mass Flow Controller?

FCI’s Model ST51 Mass Flowmeter is packaged in an explosion-proof transmitter, and the calibration is matched to the user’s actual gas composition and installation conditions.
Staff
Dec 2nd, 2013

A Versatile Solution for Water to Custody Transfer of Natural Gas

The topic of ultrasonic flowmeter recalibration is now under study by Flow Research in conjunction with Colorado Engineering Experiment Station, Inc. with the aim of producing a guideline in the near future.
Staff
Nov 18th, 2013

The History & Evolution of Thermal Flowmeters

The thermal flowmeter category has seen some compelling innovation over the years, beginning with the technology’s introduction in the 1970s.
Jesse Yoder
Aug 30th, 2013

Since the publication of the ASME standard on thermal dispersion mass flowmeters in 2011, there have been major advancements in the technology.
Staff
Feb 27th, 2013

Some of the earliest ideas for a thermal mass flow controller go back as far as 1911, when C.C. Thomas described a flowmeter containing a heated element with two thermometers upstream and downstream of the heated element.
Jesse Yoder
Feb 3rd, 2013

And the Nominees Are …