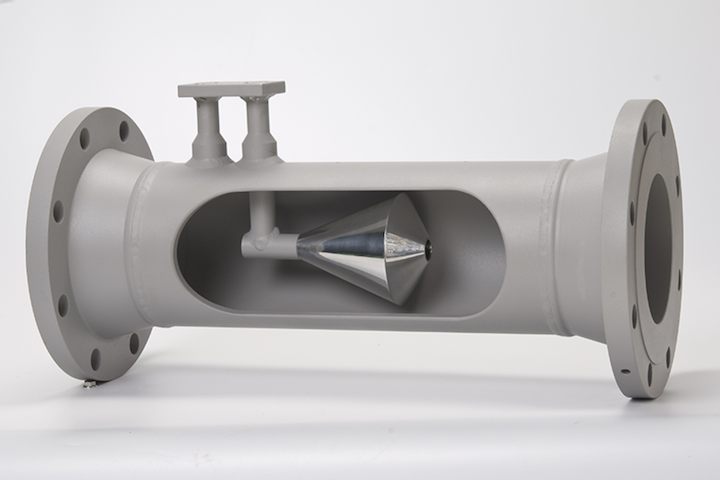 One disadvantage of this type of meter is that it must create pressure drop to compute the flow rate. Many different types of primary elements create varying amounts of pressure drop. The most common is the orifice plate, which is usually a metal round plate that contains one or more round holes.

In 1896, Max Gehre received one of the first patents on orifice meters. The first commercial orifice plate meter appeared in 1909 and was used to measure steam flow. Shortly thereafter, the oil and gas industry began using orifice plate meters because of their ease of standardization and low maintenance. In 1912, Thomas Weymouth of the United Natural Gas Company performed experimental work on the use of orifice meters to measure natural gas. Weymouth used pressure taps located 1 inch upstream and 1 inch downstream of a square-edged orifice. The Foxboro Company licensed Weymouth’s work and used it as a basis for building orifice meters shortly after this time.

The increased use of orifice meters captured the attention of several engineering organizations, and the National Bureau of Standards became involved in this research. In 1930, a joint test program generated a coefficient prediction equation based on extensive tests. That year, the American Gas Association issued AGA-1, a report on the use of differential pressure meters with orifice plates for custody transfer measurement.

Other types of primary elements such as Venturi tubes, flow nozzles, Pitot tubes and wedge elements also play unique roles. Since Venturi tubes do not have a sharp edge, they are especially useful for measuring the flow of any fluid containing suspended solids. Flow nozzles resemble Venturis but are shorter. They are used to measure flow in applications where erosion or cavitation could damage an orifice plate. Single-port and averaging Pitot tubes are often used to measure the flow of air and to measure the flow of stack gas and exhaust emissions.

Another primary element, the cone type, has recently evolved through substantial product development. McCrometer originally developed and introduced the cone meter in 1987 under the trade name V-Cone. The V-shaped cone meter consists of a cone-shaped element inserted inside a larger tube, which is placed inside a pipe. The cone has a hole in the portion that faces the flowing fluid. The fluid enters the inside of the cone, creating a pressure drop. Pressure taps are located upstream from the cone and also inside the cone itself. Flow rate is then computed using Bernoulli’s theorem. The chief advantage of the cone primary element is that it requires very little upstream pipe run so it can be used close to elbows and in tight spaces such as oil platforms. Cone meters are often sold as standalone items without a transmitter, though they require a DP flow transmitter for proper operation.

For more information about Flow Research’s work on primary elements, visit www.flowplate.com. Jesse Yoder, Ph.D., is president of Flow Research Inc. in Wakefield, Massachusetts, a company he founded in 1998. He has 28 years of experience as an analyst and writer in instrumentation. He holds a U.S. patent on a dual-tube meter design and is the author of The Tao of Measurement, published by ISA. Dr. Yoder also founded the Flowmeter Recalibration Working Group, addressing the topic of recalibration frequency. He may be reached at jesse@flowresearch.com.