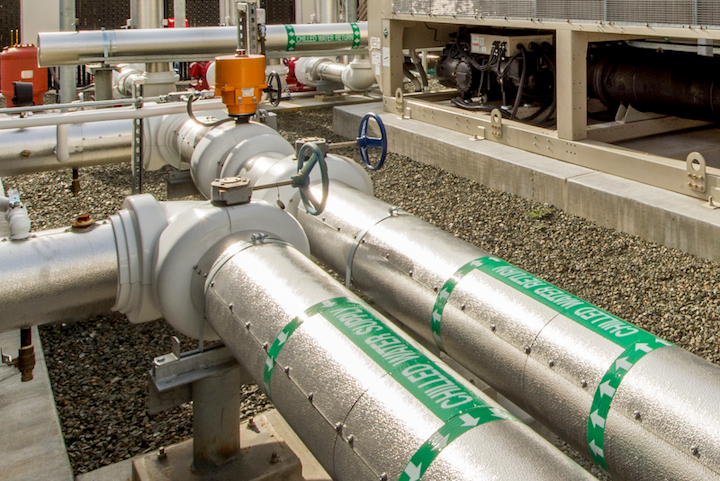 A major Mid-Atlantic university, founded in the late 19th century, currently has more than 60 major buildings on 84 acres. It generates its own steam for heating and operates five chilled water plants that distribute throughout the university. The university’s energy conservation and efficiency manager recalls the long but rewarding journey to becoming a leading green campus.

"When I first came on board, energy usage was a concern because it was a major operating expense that we wanted to keep under control," he said. "Back then, that meant monitoring the flow of heated and chilled water with only four turbine flowmeters. We took that data and used it to calculate BTU usage for our chilled, hot and potable water."

The university had a basic energy management system, but the turbine meters did not communicate with it, and flow data had to be entered manually.

"The turbine meters served our needs at the time, but needed frequent calibration and cleaning because they were designed to monitor fluids that were free of any contamination," he said. "City water, as potable as it is, always contains particulates, which are harmless to humans, but tend to collect on the vanes of turbine meters. At that time, with only four meters, it was only a modest inconvenience, but became more important as we started upgrading our energy management capability."

When the green energy movement began gaining media attention, the university’s management also decided that it would take a leading position to become a green campus. One of its highest priorities was the need for more efficient energy management.

The university was in the process of developing its environmental issues project team to recommend steps on how to fulfill its responsibility to protect the environment. The team also had the charge to increase environmental awareness on campus. Student environmental activism has since grown into a major presence on the campus.

"We were determined to create the greenest of the green campuses," said the university’s energy outreach program leader. "While we recognized the biggest potential source of savings was hot and cold water energy usage, we were adamant not to overlook even the smallest source that could contribute to the greening of our campuses. However, our first major focus was energy use."

A question of metering flow

It was clear to the university’s environmental team that extensive flow measurement was key to maximizing efficiency. As facility management began to focus on higher energy efficiency, the heads of the school began to look at minimizing the university’s carbon footprint.

"We knew early on that we would need a lot more flow measurement than we already had," said the university’s energy conservation and efficiency manager. "I wasn’t happy with the turbine meters I had inherited because of the time-consuming cleaning and recalibration. We investigated every flow metering technology we could identify, everything we could think of – vortex shedding, displacement, Coriolis, mags and others, but they all had the same problem as the turbine meter – they all made direct contact with the fluid whose flow they were measuring and would need frequent cleaning and calibration."

The team’s research led them to ultrasonic flow measurement.

"Ultrasonic flow measurement had been around for a while," he said. "Some of it was intrusive, but emerging meter technology that clamped onto the outside of a pipe and measured flow by sending ultrasonic pulses through the pipe wall was intriguing. We did research on what was available and decided to try one brand of clamp-on meter that looked like it could meet our needs, but it didn’t."

"They chose an ultrasonic meter that didn’t fit their application well," said Travis Teeter, an industrial sales engineer for Flow-Tech, one of the university’s major suppliers for measurement technologies. "The meters were big and bulky, and the only way they could install them was to build a large box around the pipe. They also had a lot of maintenance problems because they constantly had to reapply coupling grease to the meters’ transponders because the grease would migrate, gradually moving the transponders, and eventually degenerating the signal."

The university team recognized that this particular ultrasonic meter did not fit its needs, but the team was sure the technology itself was what they were looking for.

The university team then brought Flow-Tech into the search — a supplier that has helped solve measurement problems in the past, but not yet for its flow measurement solutions.

"At that time, we had taken on a manufacturer of ultrasonic meters who focused on large-volume applications," said Teeter, who was sure that FLEXIM Americas was a good fit for this application; however, the university’s team was wary after its first experience with ultrasonics.

"Not only was the contact gel a problem, we needed meters that would communicate with our energy management system," said the university’s energy conservation and efficiency manager. "The previous meters did to an extent, but not as effectively as we wanted. We had recently upgraded to an Apogee system that has been excellent at analyzing energy data, so we needed flowmeters that could provide the immediate data it needed to help us maximize efficiency."

"The technique most ultrasonic flow meters use is called transit-time difference," said Teeter. "It exploits the fact that the transmission speed of an ultrasonic signal depends on the flow velocity of the carrier medium, kind of like a swimmer swimming against the current. The signal moves slower against the flow than with it.

"When taking a measurement, the meter sends ultrasonic pulses through the medium, one in the flow direction and one against it. The transducers alternate as emitters and receivers. The transit time of the signal going with the flow is shorter than the one going against. The meter measures transit-time difference and determines the average flow velocity of the medium. Since ultrasonic signals propagate in solids, the meter can be mounted directly on the pipe and measure flow noninvasively, eliminating any need to cut the pipe."

What the university team said about gel migration was true, and it was true with the two ultrasonic meters they originally ordered.

"Those original meters relied on a gel to make acoustic contact between the meters’ transducers and the exterior of the pipes they monitored," said Teeter. "The heat from a hot water pipe would cause the gel to migrate from the contact area and give faulty temperature and flow measurements. The gels have a limited temperature tolerance. Also, high temperatures accelerate the aging of the transducer’s piezzo elements and reduce their operating life.

"That’s why FLEXIM developed permanent contact pads to replace gels for most high temperature applications up to 400°F. For higher temperatures, we developed and patented our WaveInjector transducer mounting fixture. It permits the transducers to be mounted at a safe distance from the pipe while still maintaining accurate readings. It enables a set of standard transducers to operate accurately at temperatures ranges from minus 160°F to plus 1,100°F."

The university now has more than 60 ultrasonic meters monitoring its HVAC flow and temperature and reporting to its dashboard/BAS system. It also added more new meters for domestic water and continues to expand each building. Its future plans call for adding more analytics on the data for more efficiency.

The success of the greening program

The new metering and upgraded Apogee system and dashboard were the major first steps in kicking off the greening of the university’s campus," said the university’s energy outreach leader. "But they were far from the last."

While the team was adding the HVAC monitoring system, the university was also addressing the other aspects of greening the entire campus, such as involving students in the environmental projects and increasing environmental awareness on campus.

Recently, the Association for the Advancement of Sustainability in Higher Education (AASHE) awarded the university a gold rating on their STARS scale for sustainability. In the same year, the university’s School of International Service building received the Leadership in Energy and Environmental Design (LEED) Gold certification for its 70,000-square-foot building that is renowned for sustainable design and "cradle-to-cradle" philosophy. The university was also ranked number 2 in the Sierra Club’s list of the Top 10 Greenest Colleges.

Izzy Rivera is the director of technical operations/product manager for FLEXIM Americas Corporation. He has been involved with the development of ultrasonic flow measurement for 37 years and is a co-founder of FLEXIM Americas, a subsidiary of FLEXIM GmbH. He can be reached at 631-492-2300.

Jack Sine is a freelance writer specializing in HVAC, green building and IAQ issues. He can be reached at jack.sine@verizon.net or 845-831-6578.