By Matt Migliore I recently visited my alma mater, Temple University, to get some firsthand insight on a pipeline viscosity reduction technology that promises to … 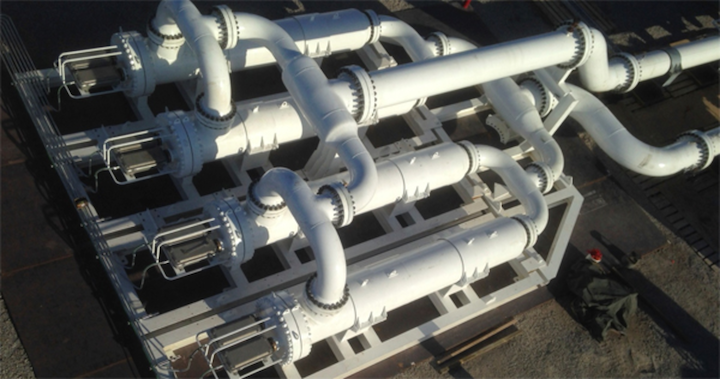 QS Energy’s AOT is a patent-protected hardware system designed to reduce the viscosity of crude oil transported via pipeline through the principles of electrorheology. (Photo courtesy of QS Energy)

I recently visited my alma mater, Temple University, to get some firsthand insight on a pipeline viscosity reduction technology that promises to minimize the energy required to flow crude oil and condensate. Rongjia Tao, Ph.D., chair of the Physics Department at Temple, is leading the research effort, in conjunction with QS Energy Inc., the owner and developer of the technology.

Crude oil is generally quite viscous because of the high concentration of particles. As such, a lot of pressure in the form of pumping power is required to move crude through a pipeline. In most cases, heating elements are employed before each pumping station in a pipeline to reduce crude viscosity so it is easier to pump. The system Dr. Tao and QS Energy are developing, called Applied Oil Technology (AOT), employs electrorheology for pipeline viscosity reduction, which is being positioned as a less energy-intensive solution than the application of heat.

Beyond viscosity reduction, the AOT system is also designed to reduce flow turbulence. Turbulence is problematic in pipeline applications for two primary reasons:

In applications where pipelines are located in remote locations and where the cost of downtime is significant, maintaining the integrity of the pipeline is critical.

The key to the success of the AOT pipeline viscosity reduction system is in how the electric field injected into the feedstock affects the particles in the crude oil. In essence, the electric field causes particulate matter, such as paraffin, asphaltene and other impurities to clump together, reducing their surface volume within crude oil, thus decreasing drag resistance and speeding the flow of oil to increase takeaway capacity. In layman’s terms, Dr. Tao says the electrorheological process upon which AOT is based essentially combines the particles into chains, and orients these chains horizontally in the direction of flow to reduce viscosity. By also reducing turbulence, Dr. Tao says the system eliminates a common pain point for refiners. "In pipeline applications, polymers are used for turbulence reduction," says Dr. Tao. "Refiners don’t like polymers because they have to filter them out during the refining process." With the AOT system, he says polymer use can be minimized.

The AOT pipeline viscosity reduction system is the result of a multi-year research and development program with extensive design, fabrication and testing protocols involving not only Temple University, but also more than a dozen companies from all sectors of the energy industry.

A major midstream operator is currently testing the AOT system on a primary crude and condensate pipeline serving the Eagle Ford shale region in South Texas. The deployment involves condensate, or ultra-light crude, carried by the pipeline with independent testing being conducted by ATS RheoSystems and Southern Research Institute (SRI).

Off-gas testing of AOT’s impact on condensate was conducted by SRI, an R&D firm that specializes in applied research. During Phase I of the test, SRI sought to determine the safety of AOT’s application on condensate in a controlled, laboratory environment. The results were successful, as the condensate upon which AOT’s electrical field was applied did not exhibit any adverse or dangerous reactions, even at maximum voltage.

Over the course of 2011–2012, QS Energy tested the AOT device at the U.S. Department of Energy’s Rocky Mountain Oilfield Testing Center in Wyoming. The initial test was on a flow loop—4.4 miles, 6", schedule 80 metal buried pipeline. The flow loop was filled with field-produced API 34° oil to facilitate testing.

The AOT device was removed in April 2012 and reworked to include a new, vertically oriented, electrically isolated chassis/skid design. The reworked device, referred to as the AOT 1.2V, was reinstalled on the test loop in May 2012, and a test was conducted for 24 consecutive hours.

When the AOT system was disengaged, viscosity and pressure were observed to revert slowly back to baseline, returning to baseline values after approximately 11 hours.

In its final report on this test, the U.S. DOE noted, "The device may hold potential for energy savings and increased pipeline flow rates for the oil production and transportation industry.”

“The exponential growth in global oil & gas production is contributing significantly to the energy industry’s pipeline capacity challenges, creating the potential for an immense, long-term market for AOT,” says Greggory Bigger, QS Energy CEO and Chairman. “In particular, takeaway congestion is causing delays in moving crude oil to storage facilities, refineries and offloading terminals around the world, making this deployment both a timely and compelling demonstration of the role AOT technology can play in mitigating these bottlenecks.”

Ultimately, QS Energy expects its AOT pipeline viscosity reduction system will attract attention for a wide range of pipeline applications, including both asphalt-based and paraffin-based crude oils. According to QS Energy, pipeline operators can expect to see a variety of measurable operational efficiencies when deploying AOT, including:

AOT has been inspected, certified, and approved to meet or exceed the specifications and quality control requirements of applicable industrial testing and certification laboratories, leading midstream producers, and transportation entities, and has been deployed on multiple, high-volume pipelines.

The AOT system is designed to seamlessly integrate with existing pump stations and can handle up to 5,000 gallons per minute (GPM). Each AOT vessel is 33’ x 8’ x 8’, and weighs approximately 20 tons, excluding headers. According to QS Energy, the technology is capable of increasing total flow volume per day of an existing asset by 10 to 15 percent and, in certain instances, de-bottlenecking pipeline choke points.

Going forward, QS Energy plans to build a portfolio of solutions consisting of alternate applications for AOT, as well as additional solutions for use within related capital-intensive distribution and transportation networks. Areas in which the company believes that the AOT pipeline viscosity reduction system may have applications include dewatering facilities, gathering systems, emulsion separation, accelerated onload/offload time, enhanced bunker fuel combustion, and offshore oil & gas.

Matt Migliore is director of content for Flow Control magazine and FlowControlNetwork.com. He has covered technology and industry for 15 years. He can be reached at 610 828-1711 or Matt@GrandViewMedia.com.