For faster, longer-lasting water filters, some scientists are looking to graphene —thin, strong sheets of carbon — to serve as ultrathin membranes, filtering out contaminants to quickly purify high volumes of water. 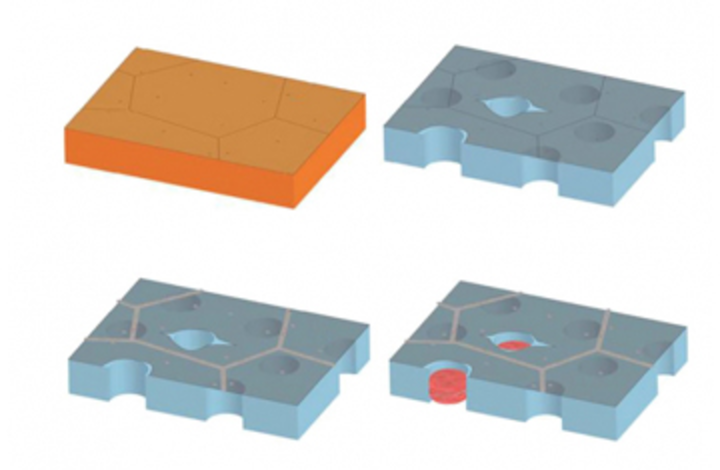 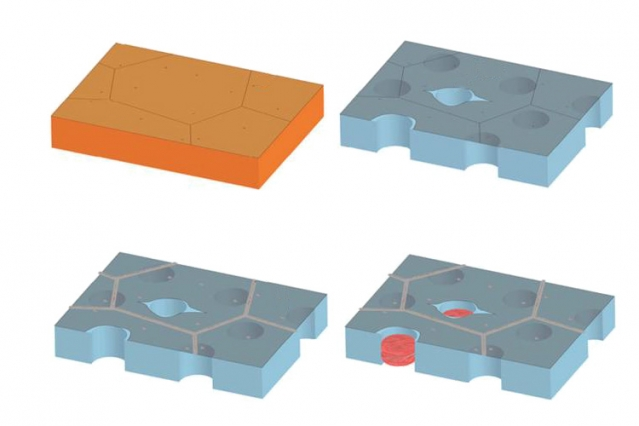 In a two-step process, engineers have successfully sealed leaks in graphene. First, the team fabricated graphene on a copper surface (top left) — a process that can create intrinsic defects in graphene, shown as cracks on the surface. After lifting the graphene and depositing it on a porous surface (top right), the transfer creates further holes and tears. In a first step (bottom left), the team used atomic layer deposition to deposit hafnium (in gray) to seal intrinsic cracks, then plugged the remaining holes (bottom left) with nylon (in red), via interfacial polymerization. (Courtesy of the MIT Researchers)

For faster, longer-lasting water filters, some scientists are looking to graphene —thin, strong sheets of carbon — to serve as ultrathin membranes, filtering out contaminants to quickly purify high volumes of water.

Graphene’s unique properties make it a potentially ideal membrane for water filtration or desalination. But there’s been one main drawback to its wider use: Making membranes in one-atom-thick layers of graphene is a meticulous process that can tear the thin material — creating defects through which contaminants can leak.

Now engineers at MIT, Oak Ridge National Laboratory, and King Fahd University of Petroleum and Minerals (KFUPM) have devised a process to repair these leaks, filling cracks and plugging holes using a combination of chemical deposition and polymerization techniques. The team then used a process it developed previously to create tiny, uniform pores in the material, small enough to allow only water to pass through.

Combining these two techniques, the researchers were able to engineer a relatively large defect-free graphene membrane — about the size of a penny. The membrane’s size is significant: To be exploited as a filtration membrane, graphene would have to be manufactured at a scale of centimeters, or larger.

In experiments, the researchers pumped water through a graphene membrane treated with both defect-sealing and pore-producing processes, and found that water flowed through at rates comparable to current desalination membranes. The graphene was able to filter out most large-molecule contaminants, such as magnesium sulfate and dextran.

“We’ve been able to seal defects, at least on the lab scale, to realize molecular filtration across a macroscopic area of graphene, which has not been possible before,” Karnik says. “If we have better process control, maybe in the future we don’t even need defect sealing. But I think it’s very unlikely that we’ll ever have perfect graphene — there will always be some need to control leakages. These two [techniques] are examples which enable filtration.”

“The current types of membranes that can produce freshwater from saltwater are fairly thick, on the order of 200 nanometers,” O’Hern says. “The benefit of a graphene membrane is, instead of being hundreds of nanometers thick, we’re on the order of three angstroms — 600 times thinner than existing membranes. This enables you to have a higher flow rate over the same area.”

O’Hern and Karnik have been investigating graphene’s potential as a filtration membrane for the past several years. In 2009, the group began fabricating membranes from graphene grown on copper — a metal that supports the growth of graphene across relatively large areas. However, copper is impermeable, requiring the group to transfer the graphene to a porous substrate following fabrication.

However, O’Hern noticed that this transfer process would create tears in graphene. What’s more, he observed intrinsic defects created during the growth process, resulting perhaps from impurities in the original material.

To plug graphene’s leaks, the team came up with a technique to first tackle the smaller intrinsic defects, then the larger transfer-induced defects. For the intrinsic defects, the researchers used a process called “atomic layer deposition,” placing the graphene membrane in a vacuum chamber, then pulsing in a hafnium-containing chemical that does not normally interact with graphene. However, if the chemical comes in contact with a small opening in graphene, it will tend to stick to that opening, attracted by the area’s higher surface energy.

The team applied several rounds of atomic layer deposition, finding that the deposited hafnium oxide successfully filled in graphene’s nanometer-scale intrinsic defects. However, O’Hern realized that using the same process to fill in much larger holes and tears — on the order of hundreds of nanometers — would require too much time.

Instead, he and his colleagues came up with a second technique to fill in larger defects, using a process called “interfacial polymerization” that is often employed in membrane synthesis. After they filled in graphene’s intrinsic defects, the researchers submerged the membrane at the interface of two solutions: a water bath and an organic solvent that, like oil, does not mix with water.

In the two solutions, the researchers dissolved two different molecules that can react to form nylon. Once O’Hern placed the graphene membrane at the interface of the two solutions, he observed that nylon plugs formed only in tears and holes — regions where the two molecules could come in contact because of tears in the otherwise impermeable graphene — effectively sealing the remaining defects.

Using a technique they developed last year, the researchers then etched tiny, uniform holes in graphene — small enough to let water molecules through, but not larger contaminants. In experiments, the group tested the membrane with water containing several different molecules, including salt, and found that the membrane rejected up to 90 percent of larger molecules. However, it let salt through at a faster rate than water.

The preliminary tests suggest that graphene may be a viable alternative to existing filtration membranes, although Karnik says techniques to seal its defects and control its permeability will need further improvements.

“Water desalination and nanofiltration are big applications where, if things work out and this technology withstands the different demands of real-world tests, it would have a large impact,” Karnik says. “But one could also imagine applications for fine chemical- or biological-sample processing, where these membranes could be useful. And this is the first report of a centimeter-scale graphene membrane that does any kind of molecular filtration. That’s exciting.”

De-en Jiang, an assistant professor of chemistry at the University of California at Riverside, sees the defect-sealing technique as “a great advance toward making graphene filtration a reality.”

“The two-step technique is very smart: sealing the defects while preserving the desired pores for filtration,” says Jiang, who did not contribute to the research. “This would make the scale-up much easier. One can produce a large graphene membrane first, not worrying about the defects, which can be sealed later.”

This research was supported in part by the Center for Clean Water and Clean Energy at MIT and KFUPM, the U.S. Department of Energy, and the National Science Foundation.