The Offshore Technology Conference Will Return to Asia In 2016

The Offshore Technology Conference Asia (OTC Asia) 2016 was announced at the OTC in Houston this week. 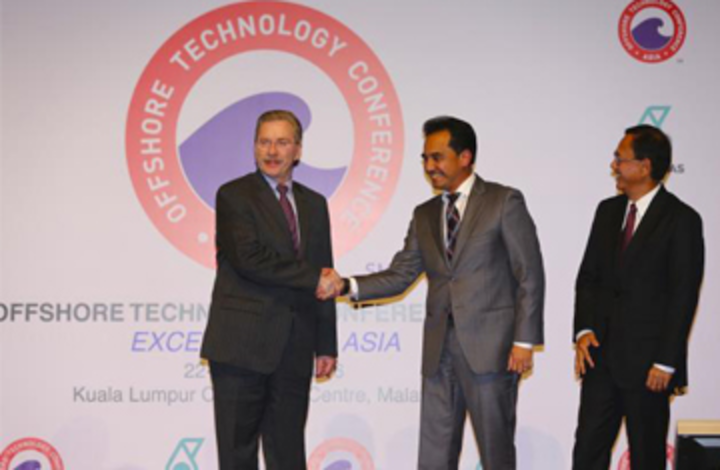 Speaking at the launch of the event, Datuk Mohd Anuar Taib, Senior Vice President, Upstream Malaysia of PETRONAS, said that the industry needs to increase collaborative efforts given the current business climate. “Like the rest of the world, the industry landscape in Asia is challenged by the new realities in oil prices,” he said. “Yet, instead of focusing on matters beyond our control, Asia is now positioning itself to set another record of rebound and resilience in responding to the challenges by building on our solid fundamentals of operational excellence and closer regional cooperation efforts. Hence, the theme for OTC Asia 2016 is an ideal backdrop to deliver these aspirations – Excellence in Asia.”

The launch featured a grand prize drawing of a round-trip airline ticket to Kuala Lumpur to attend OTC Asia 2016, courtesy of Halliburton. This was followed by a tour of the Malaysian Exhibition Pavilion, which featured some of the leading Malaysian industry players – Malaysia External Trade Development Corporation (MATRADE), Malaysia Petroleum Resources Corporation (MPRC), Muhibbah Engineering and Eversendai Offshore – and 16 small- and medium-sized Malaysian enterprises.

Themed “Excellence in Asia,” OTC Asia 2016 reflects the region’s position as a global provider of technology where cultural and geographical diversity foster collaboration and innovation, according to the press announcement about the event. OTC Asia 2016 will showcase Asia’s achievements, its aspirations, and the important technological developments that the region needs to stay robust and resilient in the shifting global energy market. The growing Asian representation at OTC echoes this sentiment.

Edward Stokes, OTC Board Chairman and Marine Project Manager, Alaska LNG, ConocoPhillips said, “The positive and enthusiastic response by the oil and gas industry to the first OTC Asia demonstrated Asia’s growing prominence in the global energy mix and the importance of having a platform such as OTC Asia for energy professionals to meet to exchange ideas and opinions regarding the advancement of scientific and technical knowledge for offshore resources, as well as to make new business and trade connections.”

READ ALSO: China Will Overtake the U.S. as World’s Leading Pump Producer By 2018

OTC Asia 2016 will welcome global industry leaders and energy professionals representing more than 85 countries. Held in conjunction with the conference and exhibition are new components such as The Next Wave and STEM (Science, Technology, Engineering and Mathematics) program catered for young professionals and students, and the Spotlight on New Technology Award, which recognizes the latest and most advanced technologies from Asia Pacific.