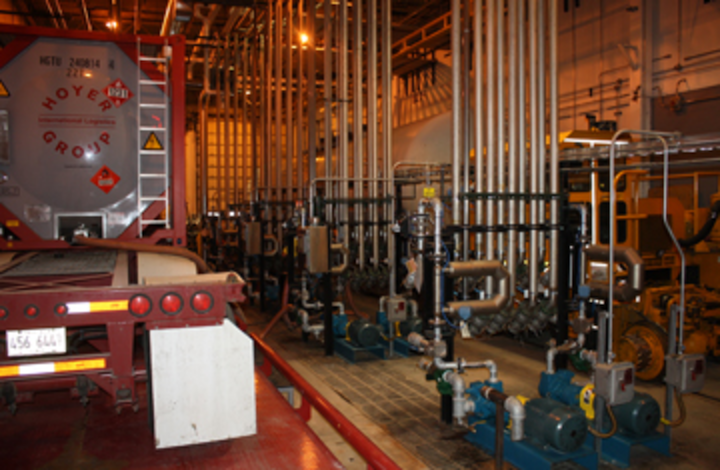 When Edward Polen decided to change his careers as a pharmacist and chemical salesman in 1971 so that he could incorporate his own chemical packaging and distribution company in suburban Chicago he probably never envisioned that his E-M Company would experience days like Aug. 6, 2013. That’s when Polen cut the ribbon on a new 300,000-square-foot corporate headquarters and distribution facility in Pleasant Prairie, Wisconsin, a few miles north and 42 years after it all began in Polen’s garage.

“We are thrilled to be expanding our company by opening this new facility in Pleasant Prairie,” Polen told the audience at the dedication event, which included Wisconsin Gov. Scott Walker. “Although we have been doing business in Wisconsin since 1971, we are excited to have a physical presence with the opening of our state-of-the-art manufacturing/distribution facility and corporate headquarters. This expansion allows great opportunity for EMCO to grow.”

Thanks to Polen’s 40-plus years of determination and vision, EMCO Chemical Distributors Inc., the name that replaced E-M Co. in 1985, has grown into one of the 10 largest privately owned distributors, blenders, and custom packagers of industrial chemicals, specialty chemicals, and fine ingredients in the United States, and the 44th largest in the world, with more than $300 million in annual sales. The opening of the Pleasant Prairie facility was the culmination of a three-year design, engineering and construction process that was initiated with the purchase of a vacant facility that had previously been used as a resin and ink plant for the printing industry.

Working with a vacant facility was an advantage for EMCO’s design team that was headed by B.J. Korman, Vice President of Engineering, Stuart Levy, Vice President, Maintenance, and Mark Serdar, Facilities Maintenance Manager. The empty building was like a blank canvas on which they could imprint their hopes and dreams for the facility. The result is an operation that features 10 miles of stainless-steel pipe, 64,000 miles of wire, more than 1 million gallons of liquid-storage space, upward of 70 dedicated storage tanks, a 25-car railway siding, and side-by-side transport-truck and railcar loading/unloading docks.

However, a project of this scope could only be successful if exacting attention was paid to even the smallest of details. That’s one of the main reasons why EMCO decided that it would build its own hoses that would be used for loading and unloading at the docks, and color code them so that the proper hose would always be used to handle the appropriate chemical.

“We make our own hoses, mainly because of the optimized turnaround time. We make them ‘right now’ and get them out to the guys that need them,” said Serdar. “We make it any length we need and if the ends get wrecked, we just cut a foot off and put a new end on.”

A crucial component of the hose is the coupling at each end that is used to connect the hose to a truck or railcar and the loading/unloading rack. These couplings cannot leak and must be easy for the operator to handle, with no wasted time. For this task, EMCO has chosen Autolok and Kamlok Quick Disconnects from OPW Engineered Systems, of Lebanon, Ohio. The Autoloks feature OPW’s patented Twin-Kam feature that holds the adaptor more securely for increased protection against an accidental release. Kamloks are the world’s most popular cam-and-groove coupling thanks to their ease of use and reliably safe operation.

“The Autoloks and Kamloks are great, they keep the guys from accidentally popping the coupling on the hose,” said Serdar. “It’s also a very simple end to disconnect and reconnect with gloves on, so the simplicity of working that connection is important to the guys. We must have around 500 Autoloks and Kamloks in use. We do all of the pressure testing and each hose gets an ID tag so we can track that hose, and the Autoloks and Kamloks make the certification process that much easier.”

Helping deliver the highest level of operator safety at the loading/unloading docks is a Model 8030 Ground Verification Monitor system from Civacon, based in Kansas City, Missouri. The 8030 ground system has been designed to visually confirm a ground connection between the truck or railcar and the loading terminal. If no ground connection is verified, the loading or unloading process will not be allowed to begin.

“The reason we chose the 8030 is that it gives a visual indication that something is grounded,” said Korman. “At EMCO, safety is of the utmost importance and that is one of the reasons why we chose the 8030 grounding package. Not only do you get a good visual of what’s going on, whether the vehicle is grounded, but we also tied it into our Programmable Logic Controller (PLC) so that a pump won’t start unless there’s a ground, and if it loses ground during a pumping operation, that pump will automatically turn off.”

“They were looking for the best type of coupling and ground-verification equipment and asked what we recommended, and we were quick to recommend OPW and Civacon,” said Cervantes.

It’s often the little things that result in greater success, and EMCO Chemical Distributors has helped ensure the viability of its new facility by choosing top-of-the-line equipment and components, all the way down to the hose couplings and ground-verification equipment.

“The moral of the story is that if you team up with the right people and design systems per the requirements, you’re going to get a great result, and in our situation it has exceeded our requirements,” said Korman.

Dave Morrow is the Director of Product Management for OPW Engineered Systems, part of Dover Corporation’s OPW division. Mr. Morrow has 18 years of experience in the fluid handling industry and currently leads product development for the chemical and industrial unit of OPW. Mr. Morrow can be reached at David.Morrow@opwglobal.com.