IE4 motors marketed as “Super Premium Efficiency” motors have rapidly carved out a space in the high-efficiency motor niche. 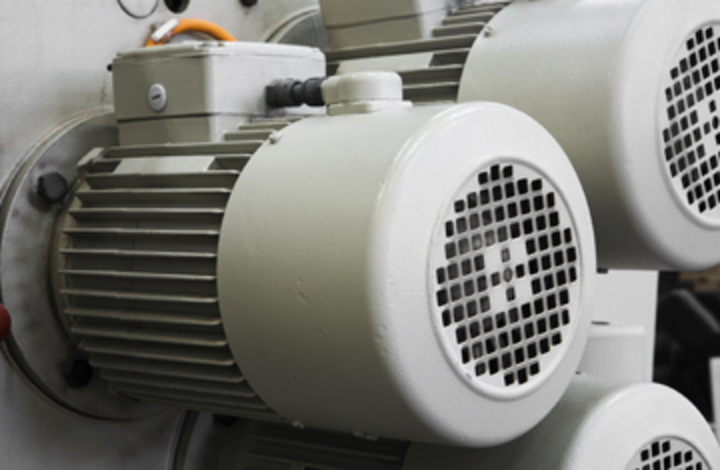 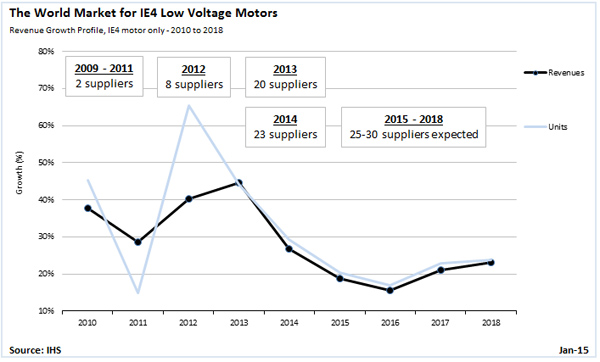 While the majority of the world continues to transition to higher efficiency IE2, IE3 and NEMA Premium low-voltage (LV) motors, IE4 motors marketed to the industrial machinery market as “Super Premium Efficiency” motors have rapidly carved out a space in the high efficiency motor niche, according to Mark Meza, principal analyst for rotating machines and controls, at IHS Technology.

Since 2009, this market has posted consecutive, double-digit growth rates and almost quadrupled in value in 2013 to reach $114.7 million with nearly 259,000 units shipped. Although a relatively small market compared to the entire global integral horsepower industrial LV motor market, this niche market for high efficiency motors is predicted to grow robustly to $297.3 million by 2018. IHS believes that growth in this LV motor market segment has been ignited by regional legislation for stand-alone LV motors, soon-to-be implemented systems efficiency legislation governing the efficiency of the motor driven system, and the general, increased focus in industrial segments on achieving the highest possible efficiencies.

Meza says it’s notable that no government legislation exists that mandates IE4 Super Premium Efficiency motors be sold at a certain date, like its AC induction IE2, IE3 and NEMA Premium counterparts, making the purchase of these motors by the industrial machinery market a decision based purely on the high efficiencies and the quicker return on investment in the form of electricity savings that these motors can provide in certain applications and usage models.

Industrial applications that are defined by continuous-duty cycles are prime targets for IE4 Super Premium Efficiency motors, as these motors are actually displacing the regulated high efficiency motor market to some extent, according to Meza.

The reasons to enter this market are compelling to suppliers because of the high profit margins they can achieve on these types of motors that usually include higher-priced raw materials. Industrial pump and gearbox manufacturers have been aggressive in producing or procuring their own IE4 motors to sell with their like-branded high efficiency end-equipment. IHS expects fan and compressor manufacturers to follow suit and enter the market by the end of the decade.

The rapid evolution of this market is well-documented. In 2009, two suppliers controlled the majority of the market, with both focusing on a neodymium-based magnet design. By 2013, 20 suppliers including traditional LV motor manufacturers as well as end-equipment manufacturers have thrown their respective hats into the ring, bringing with them new and established IE4 motor technologies. Even though the International Electrochemical Commission (IEC) has only defined the line-start, asynchronous version of IE4 motors in early 2014, suppliers have capitalized on marketing their IE4 motors as “Super Premium Efficiency” starting in 2009 and have continued to experience a positive reaction from the industrial machinery market.

More information can be found in the report, “The World Market for IE4 Low-Voltage Motors – 2015 Edition” from IHS.