Compared with the industrial automation hardware business, the market for SCADA software automation products is expected to experience higher growth in the future. 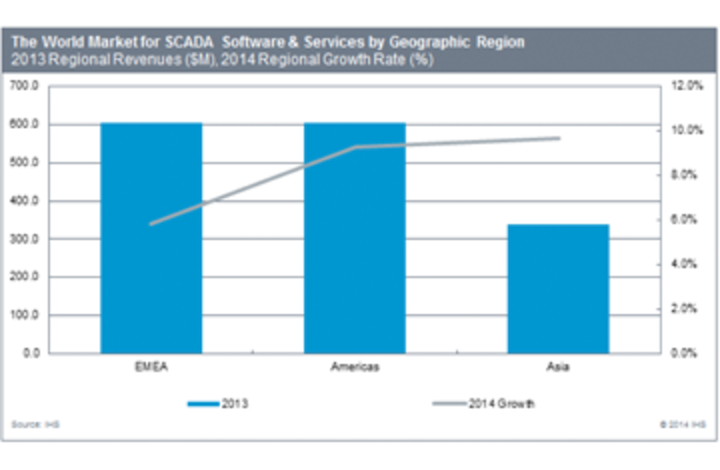 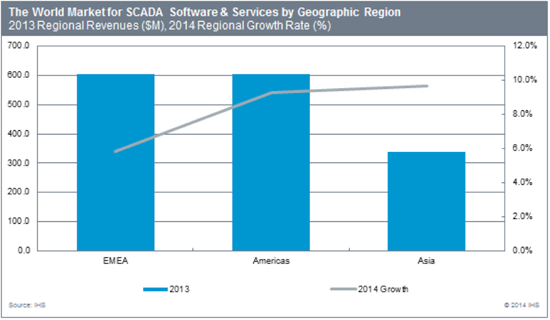 Hong says this growth is partly because SCADA products are mostly used in large investments in the energy business—such as in oil and gas and power facilities—an area that is performing better than other sectors. He says SCADA’s strong growth is also due to an increasing number of customers becoming aware of the importance of such software, which can enhance their production lines’ efficiency.

Americas Lead the Way in Sales

As the most important market for industrial automation investments, the Americas region generated the most SCADA sales revenue worldwide in 2013. The biggest contributor is the United States, which accounted for most of the revenue in the Americas region. The major factors driving the scale and growth of the Americas region are investments in the oil and gas markets, as well as the strong domestic consumption in the food and beverage and power markets. Canada and Latin American countries also contribute copious opportunities in the oil and gas industry, Hong says.

Europe was the second largest market for SCADA in 2013, only slightly smaller than the Americas. The market driver for Europe is its strong machinery and manufacturing industries. Germany is the key SCADA user in the region mainly due to the country’s cornerstone automotive industry.

Russia and the Middle East were the main contributors for global oil and gas production, which is suffering from the declining price of crude oil. This price decrease is diminishing the investment opportunity, Hong says.

Europe as a whole is slowly dragging itself out of recession, Hong points out. With tight fiscal policies and credit conditions in several countries, excess industrial capacity and still relatively weak export demand, there are few signs of a strong upturn for the region in the near future.

Asia-Pacific, which had been one of the fastest-growing regions in the past few years, is undergoing a major deceleration. China is the major cause for that. China’s leadership has identified financial stability as its most important objective, with only moderate stimulus applied. Because of that, many investments have been delayed. Thus, the overall Asia market had a lower growth in 2013 compared with past years, according to IHS. However, Asia still experienced the highest rate of expansion of all worldwide regions due to its small revenue base and plentiful investment opportunities. Extensive investments are being made in industries related to basic domestic consumption, such as food and beverage and water and wastewater.

Another important country in Asia is Japan, according to IHS. Since 2012, the Japanese government pushed forward strong economic incentive plans by applying fiscal stimulus, engaging in monetary easing and implementing structural reforms. But when measured in U.S. dollars, the market showed a decline in growth in 2013 because the currency had depreciated by more than 10 percent in terms of exchange from the yen to the U.S. dollar.