The best material to keep carbon dioxide from natural gas wells from fouling the atmosphere may be a derivative of asphalt, according to Rice University scientists. 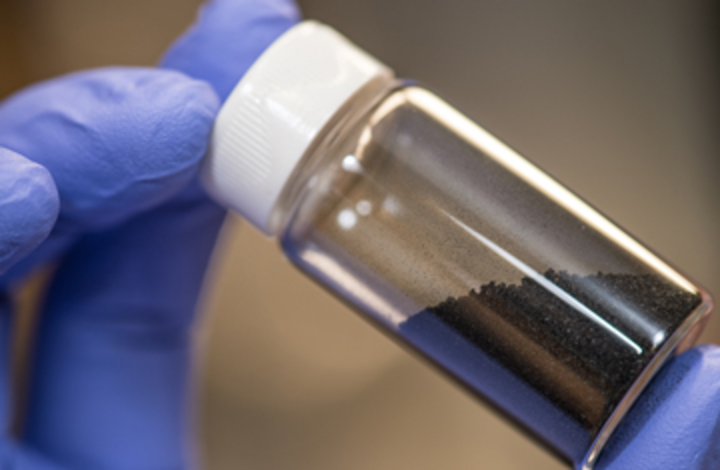 The best material to keep carbon dioxide from natural gas wells from fouling the atmosphere may be a derivative of asphalt, according to Rice University scientists.

The Rice laboratory chemist James Tour followed up on last year’s discovery of a “green” carbon capture material for wellhead sequestration with the news that an even better compound could be made cheaply in a few steps from asphalt, the black, petroleum-based substance primarily used to build roads.

The research appears in the American Chemical Society journal Applied Materials and Interfaces.

The best version of several made by the Tour lab is a powder that holds 114 percent of its weight in carbon dioxide. Like last year’s material, these new porous carbon materials capture carbon dioxide molecules at room temperature while letting the desired methane natural gas flow through.

The basic compound known as asphalt-porous carbon (A-PC) captures carbon dioxide as it leaves a wellhead under pressure supplied by the rising gas itself (about 30 atmospheres, or 30 times atmospheric pressure at sea level). When the pressure is relieved, A-PC spontaneously releases the carbon dioxide, which can be piped off to storage, pumped back downhole or repurposed for such uses as enhanced oil recovery.

“This provides an ultra-inexpensive route to a high-value material for the capture of carbon dioxide from natural gas streams,” Tour said. “Not only did we increase its capacity, we lowered the price substantially.” He said they tried many grades of asphalt, some costing as little as 30 cents per pound.

Tour’s goal is to simplify the process of capturing carbon from wellheads at sea, where there’s limited room for bulky equipment. The ability of A-PC to capture and release carbon over many cycles without degrading makes it practical, he said.

The paper’s lead authors, postdoctoral associate Almaz Jalilov and graduate student Gedeng Ruan, and their Rice colleagues made A-PC by mixing asphalt with potassium hydroxide at high temperature; they turned it into a porous carbon with a lot of surface area: 2,780 square meters per gram. That material captured 93 percent of its weight in carbon dioxide. Further experiments showed processing A-PC with ammonia and then hydrogen increased its capacity to 114 percent.

Tour said the lab is continuing to tweak the material but noted that it’s already better for carbon capture than other materials in current use. Amine-based materials now used by industrial facilities like power plants to absorb carbon dioxide are expensive and corrosive and can only capture about 13 percent carbon dioxide by weight. Materials in development based on metal organic frameworks are far more expensive to produce and don’t show as great a selectivity for carbon dioxide over methane, he said.

The paper’s co-authors are graduate students Chih-Chau Hwang, Desmond Schipper, Yilun Li, Huilong Fei and Errol Samuel and lab assistant Josiah Tour, all of Rice. Tour is the T.T. and W.F. Chao Chair in Chemistry as well as a professor of materials science and nanoengineering and of computer science and a member of the Richard E. Smalley Institute for Nanoscale Science and Technology.