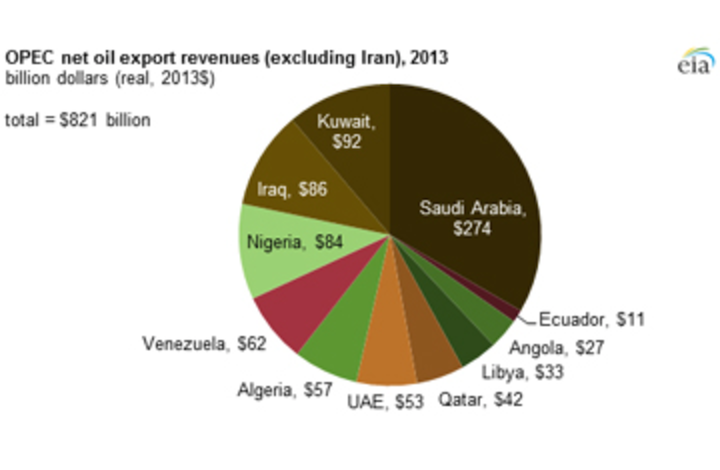 Source: U.S. Energy Information Administration, Short-Term Energy Outlook
Note: OPEC is the Organization of the Petroleum Exporting Countries. Iran is excluded because current sanctions make it difficult to estimate revenues. The 2014 revenue estimates are subject to revision as historical production and consumption data are updated.

Based on crude oil market assessments in the Short-Term Energy Outlook, the U.S. Energy Information Administration estimates that members of the Organization of the Petroleum Exporting Countries (OPEC), excluding Iran, will earn about $700 billion in revenue from net oil exports in 2014, a 14 percent decrease from 2013 earnings and the lowest earnings for the group since 2010.

According to the EIA, OPEC earnings declined in 2014 largely for two reasons: decreases in the amount of OPEC oil exports and lower oil prices, with the 2014 average for Brent crude oil projected to be 8 percent below the average 2013 price.

Iran is excluded in this calculation because current sanctions make it difficult to estimate their crude oil export revenues. Iran may be taking discounts on the crude oil it exports and may not be receiving all the revenue from those sales because of restrictions on accessing international payment systems, according to EIA.

Prolonged periods of lower oil prices have the largest effect on OPEC countries that are more sensitive to losses in revenue, most notably Venezuela, Iraq, and Ecuador. Governments in these countries were already running fiscal deficits in 2013, and their sovereign wealth funds are smaller compared to other OPEC members. This implies that these countries may not be able to fill budget gaps for as long as other OPEC members.

Further revisions to future budget plans may be required in many OPEC member countries, particularly the countries cited above, because of lower oil prices and large uncertainty over future global economic growth and crude oil production levels. Geopolitical risk may also be elevated because of lower government spending, EIA says. 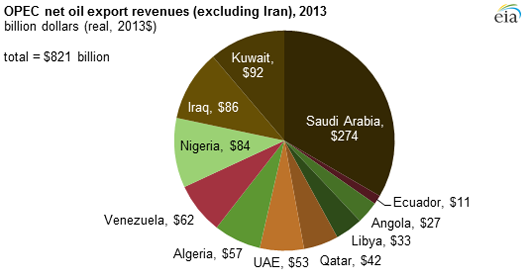