After declining for two straight years, revenues from the sales of motion-control products are forecast to grow over 6 percent in 2014 to $12.2 billion, according to IHS. 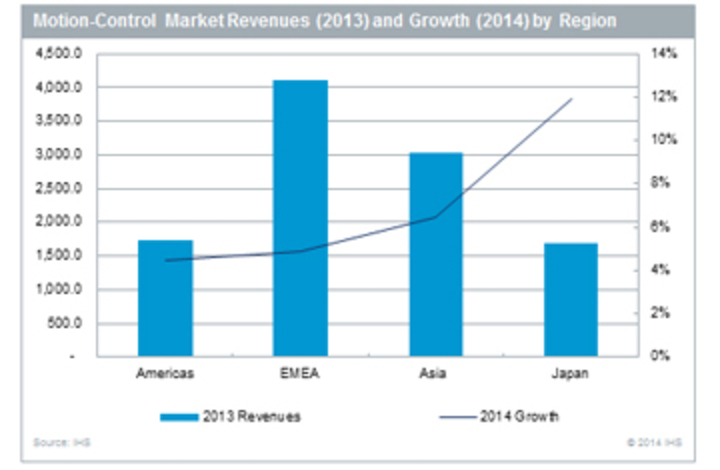 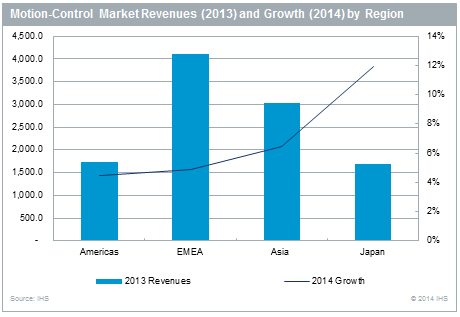 After declining for two straight years, revenues from the sales of motion-control products are forecast to grow over 6 percent in 2014 to $12.2 billion, according to the latest IHS study on the market for motion controls. Still, this would leave the market about 4 percent below the previous peak reached in 2011.

As defined by IHS, the market for motion controls includes general motion control (GMC) and computer numerical control (CNC) servo motors, servo drives, and position control hardware. (Note: DC brushless motors are excluded from the scope of this research.) Market revenues reached a record high in 2011 following two years of growth in excess of 20 percent. In 2012, the motion-control market suffered from the poor economic situation in the Eurozone, a weak semiconductor market in Japan and the fallout from overproduction in China, causing global market revenues to decline 7.8 percent. Conversely, the American market provided a bright spot for geared products, growing 6.0 percent in 2012.

Revenues in the motion-control market declined for a second straight year in 2013, though the rate of decline slowed to 2.3 percent. The market grew 4.1 percent in terms of unit shipments, but growth in terms of US dollars was constrained by the weakening of the Japanese Yen, as Japan accounted for over 16 percent of revenues in the motion control market in 2013. Sales were also constrained by limited demand in the machine tools and semiconductor sectors, which combined to account for over 45 percent of market revenues in 2013.

The outlook for 2014 is more optimistic as growth accelerates in global machinery production. The figure in the chart shows the estimated size of the motion control market by region in 2013 and the growth forecast for 2014. A year of unusually high growth has been observed in Japanese market in 2014, fueled by high growth in machine tool production and sectors related to the production of smart phones and automobiles, which includes electronics assembly, semiconductor machinery, and robotics. The Eurozone returned to economic growth in 2014 after two straight years of GDP declines and motion-control suppliers reported a very strong first half of the year in terms of sales in the EMEA region.

Growth in the American market has been boosted by a strong recovery in the semiconductor sector. The Asian GMC market is expected to exceed 2011 levels in 2014 after a second straight year of strong growth, though growth in the Asian CNC market continues to be limited by overcapacity issues in China.

Similar growth is expected at the global level in 2015, with the global market forecast to increase by 6.7 percent to reach $13.1 million in revenues. This would represent a new record high, exceeding the 2011 peak by 2.4 percent.