By remotely "combing" the atmosphere with a custom laser-based instrument, researchers from NIST and NOAA, have developed a new technique that can accurately measure amounts of several of the major "greenhouse" gases implicated in climate change. 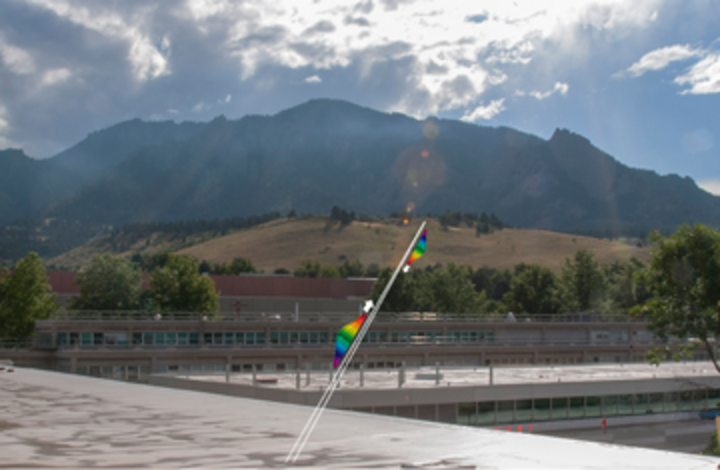 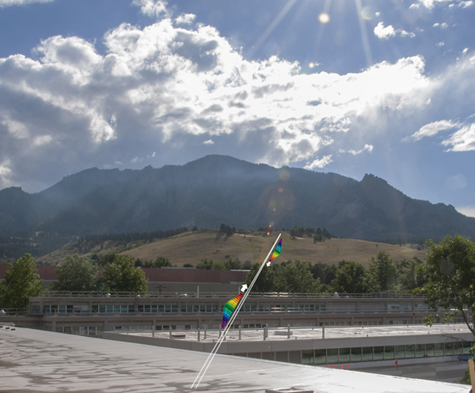 Photo illustration of NIST experiment using a pair of laser frequency combs (depicted as rainbow-colored cartoons) to detect the simultaneous signatures of several greenhouse gases along a 2-kilometer path between an NIST laboratory roof and a nearby mesa. Each comb tooth represents a different frequency of light. To identify gases in the atmosphere, researchers measured the amount of comb light absorbed at different frequencies along the path. Source: Burrus and Irvine/NIST

By remotely "combing" the atmosphere with a custom laser-based instrument, researchers from the National Institute of Standards and Technology (NIST), in collaboration with researchers from the National Oceanic and Atmospheric Administration (NOAA), have developed a new technique that can accurately measure—over a sizeable distance—amounts of several of the major "greenhouse" gases implicated in climate change.

The technique potentially could be used in several ways to support research on atmospheric greenhouse gases. It can provide accurate data to support ongoing and future satellite monitoring of the composition of the atmosphere. With development, more portable systems based on the technology could provide very accurate, continuous regional monitoring of these gases over kilometer scales—a capability lacking with current monitoring techniques, according to NIST.

In the recent demonstration,* NIST's pair of laser frequency combs measured the simultaneous signatures of several greenhouse gases — including carbon dioxide, methane and water vapor — along a 2-kilometer path between a NIST laboratory roof in Boulder, Colo., and a nearby mesa.

Frequency combs are laser-generated tools made up of a large number of very precisely defined frequencies that are evenly spaced, like the teeth on a pocket comb. Each comb "tooth" represents an individual color, or frequency, enabling very accurate measurements of the characteristic absorption signatures of different gas molecules of interest.

Researchers identified gases in the atmosphere by measuring the amount of comb light absorbed at different frequencies during its trip from the NIST lab roof to a mirror on the mesa and back to a detector in a lab. Because the optical frequencies are too high to be measured directly, the researchers borrowed a trick from early radio. They created two combs with slightly different spacing between the teeth. Mixing light from these dual frequency combs together creates a "beat" frequency shifted down to the radio band, low enough to be measured. This was the first demonstration of the technique over long distances outdoors.

Remote sensing of atmospheric gases — from a satellite, for instance — can be performed with conventional instruments called spectrometers, but while satellite instruments have global coverage, they sample specific regions on Earth infrequently. Therefore, regional measurements are made with ground-based point sensors, which have a range that can be measured in meters and varies with wind conditions. There are no portable sensors that can measure multiple gases at long range with consistent results.

The NIST comb system was built to detect gases, including carbon dioxide, methane, and water over 2 kilometers. In principle, the dual-comb technique could detect an even wider range of gases over many kilometers. Accuracy in the measured atmospheric transmission is assured by the well-defined position of each frequency comb tooth. Because the technique makes repeated measurements rapidly over the same path, it is immune to signal distortions caused by atmospheric turbulence. And because the comb measurements can be averaged over the entire path length rather than relying on a few spot measurements, the comb method is better matched to the scale of atmospheric transport models.

In the demonstration, the research team collected data continuously for three days under varied weather conditions. The results were comparable to data collected by a nearby point sensor under well-mixed atmospheric conditions. The comb measurements were also very precise — with uncertainty of less than 1 part per million for carbon dioxide, for example, obtained in five minutes. That's precise enough to ensure detection of small increases in trace gases due to large, distributed sources such as cities. Future systems should be able to achieve even better sensitivities over shorter timescales.

Overall, the study results suggest that the dual comb technique is ideally suited to precise, reproducible sensing of trace gases in the atmosphere and can support the development of accurate models for use in global, satellite-based greenhouse gas monitoring. NIST researchers now plan to optimize the comb system by boosting power to improve sensitivity and expanding spectral coverage to identify additional gases. Portable frequency comb systems** could eventually support regional gas monitoring at costs comparable to point sensors, the researchers say, but over the kilometer scales relevant to many transport models and to monitoring of distributed sources such as large cities.

** See "Portable Frequency Comb Rolls Out of the Lab."