The customer reviewed the Rosemount 8800 Vortex design and was impressed by the high temperature performance of the Severe Service Sensor and the weld-end meter body design. 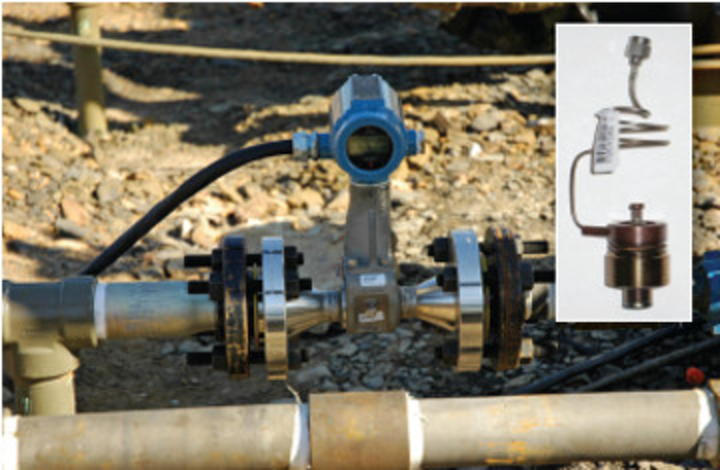 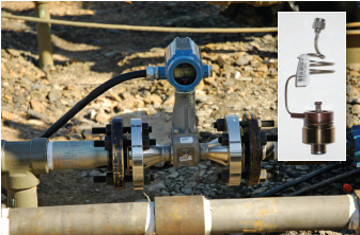 Offshore Application: National oil companies, independent oil companies, and well service companies all operate offshore oil drilling platforms with key unit operations to support the production of petroleum products. The instrumentation used on these platforms includes multiple flowmeter technologies, which are selected for each application based on the flow measurement requirements and the capabilities of the flowmeter technology. After carefully reviewing all of the published specifications and manufacturer’s recommendations for flowmeter selection, the Rosemount 8800 Vortex Flowmeter was selected for a water flow measurement off a first-stage separator.

After nearly a year in service, a service technician was sent out to inspect the failure of the vortex flowmeter. At this point all that the service technician knew was that a flowmeter that had been reliably reporting flow for several months had suddenly dropped to an output of 4mA (or zero flow). The technician dutifully followed the instructions in the operation manual and discovered the vortex sensor had failed. Thankfully, the line didn’t need to be shut down to replace the faulty sensor—as a replacement sensor was available off the shelf.

As a follow-up to the failure, the technician sent the sensor out for analysis to determine the failure mode. After a few days the failure analysis results came back, showing the sensor failed due to chloride induced stress corrosion cracking in the sensor lead wire. Although the sensor was isolated from the process fluid, it was exposed to the chloride-rich offshore ambient environment. Additionally, the sensor was in close proximity to a high temperature process line, which further accelerated the corrosive action.

After checking with the factory, the service technician learned that a new vortex sensor, known as the Severe Service Sensor, was now available. The new sensor featured a Monel 400 sensor lead wire and Inconel 600 sensor housing material. Both of these materials have been proven to resist chloride-induced stress corrosion cracking. After replacing the standard sensor with the new Rosemount 8800 Vortex Severe Service Sensor, the technician confidently concluded that the replacement sensor was able to withstand the challenging offshore environment.

The Rosemount 8800 Vortex Severe Service Sensor was designed with the toughest process conditions in mind. A unique nickel-alloy sensor lead wire and housing material of construction support resistance to corrosion in ambient environments where chloride levels are elevated, such as near-shore or offshore marine environments. A proprietary piezoelectric crystal is designed to handle continuous exposure to process temperatures that were previously considered untenable. These two key features combine to make the Rosemount 8800 Vortex Severe Service Sensor a truly rugged and reliable vortex sensor capable of standing up to the requirements of the most difficult applications.

Solar Application: Spain is one of the most advanced countries in the development of solar energy.  One type of a concentrating solar power plant uses solar troughs. These solar troughs are essentially long parabolic mirror troughs that focus the energy of the sun on a pipe. The pipeline contains high-efficiency heat transfer oil, which is heated and delivered to a central unit where the heat can be used to create steam and ultimately generate electricity. These solar trough pipelines can see temperatures as high as 600 F to 700 F. It is essential that the flowmeter technology used to monitor these flows can tolerate continuous high temperature process fluid.

Vortex technology was previously selected on a solar project to measure the flow of the heat-transfer fluid. Unfortunately, the flowmeter manufacturer that was selected provided a flowmeter with a gasket in the meter body and a vortex sensor that failed after being installed for only two months of service. Not only did the vortex meter fail and lose the ability to reliably report flow after a short installed service life, inspection of the metering point at the time of failure showed that the meter was also leaking heat-transfer oil through the gasket connection for the vortex sensor and on both process flanges.

The customer reviewed the Rosemount 8800 Vortex design and was impressed by the high temperature performance of the Severe Service Sensor and the weld-end meter body design, which eliminated all leak points from the flowmeter installation.  After several months in service, the severe service sensors have stayed online and continued to function, while there have been no leaks detected at the installation point.