Many tank inventory operators have begun adopting the recommended practices set out in the American Petroleum Institute’s API RP 2350, one of which is the development of Levels of Concern, or LOCs, for each tank in an inventory. 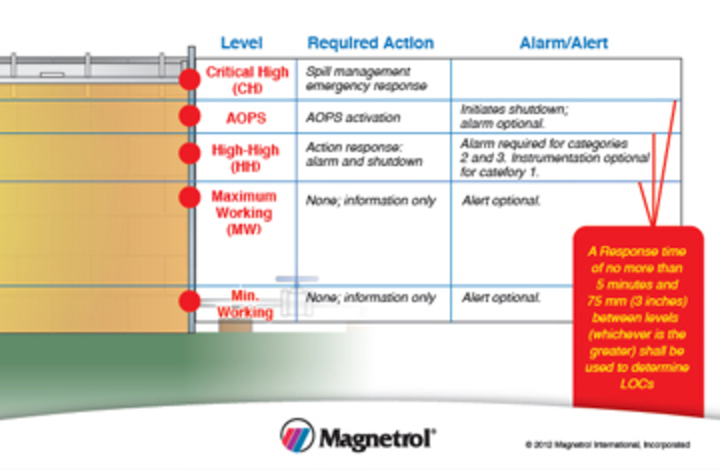 Many tank inventory operators have begun adopting the recommended practices set out in the American Petroleum Institute’s API RP 2350 fourth edition – which features safety measures to prevent tank overfill hazards. A key recommendation of API RP 2350 is the development of Levels of Concern, or LOCs, for each tank in an inventory.

Simply put, LOCs are calculated product levels in the tank, upon which all alarm and alert positions and response times are based. Careful calculation of tank LOCs ensures the success of an overfill prevention system that complies with the API recommended practices. The API 2350 guidelines define five LOCs, starting from the top of the tank: 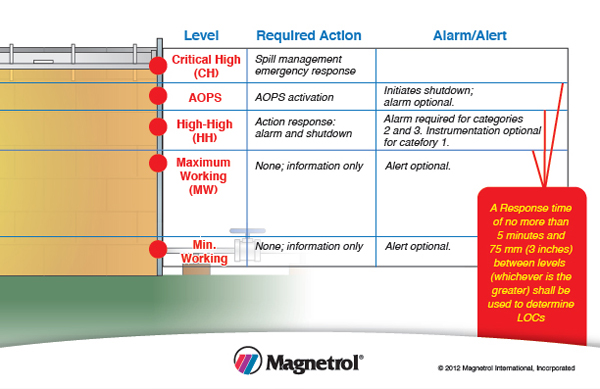 For each LOC, the guidelines specify required actions, including necessary alarms, alerts and response times. For example, at the CH level, spill management emergency response is activated, with an allowable response time of no less than 5 minutes or 75 mm (whichever is greater), based on the prior level. The graphic below helps illustrate LOC definitions.

This post originally appeared on Magnetrol International's blog, which can be found at levelandflowsolutions.magnetrol.com/blog/.