A new form of clean coal technology reached an important milestone recently, with the successful operation of a research-scale combustion system at Ohio State University. 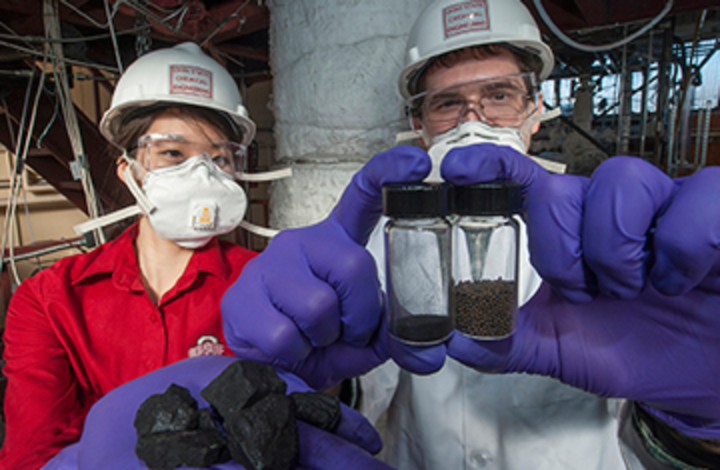 For 203 continuous hours, the Ohio State combustion unit produced heat from coal while capturing 99 percent of the carbon dioxide produced in the reaction.

Liang-Shih Fan, professor of chemical and biomolecular engineering and director of Ohio State’s Clean Coal Research Laboratory, pioneered the technology called Coal-Direct Chemical Looping (CDCL), which chemically harnesses coal’s energy and efficiently contains the carbon dioxide produced before it can be released into the atmosphere.

“In the simplest sense, combustion is a chemical reaction that consumes oxygen and produces heat,” Fan said in a prepared statement. “Unfortunately, it also produces carbon dioxide, which is difficult to capture and bad for the environment. So we found a way to release the heat without burning. We carefully control the chemical reaction so that the coal never burns—it is consumed chemically, and the carbon dioxide is entirely contained inside the reactor.”

Dawei Wang, a research associate and one of the group's team leaders, described the technology’s potential benefits. "The commercial-scale CDCL plant could really promote our energy independence. Not only can we use America's natural resources, such as Ohio coal, but we can keep our air clean and spur the economy with jobs," he said.

Though other laboratories around the world are trying to develop similar clean coal technology to directly convert coal to electricity, Fan’s lab is unique in the way it processes fossil fuels. The Ohio State group typically studies coal in the two forms that are already commonly available to the power industry: crushed coal “feedstock,” and coal-derived syngas.

The latter fuel has been successfully studied in a second sub-pilot research-scale unit, through a similar process called Syngas Chemical Looping (SCL). Both units are located in a building on Ohio State’s Columbus campus, and each is contained in a 25-foot-high insulated metal cylinder that resembles a very tall home water heater tank.

No other lab has continuously operated a coal-direct chemical looping unit as long as the Ohio State lab did last September, says the university. But as doctoral student Elena Chung explained, the experiment could have continued.

“We voluntarily chose to stop the unit. We actually could have run longer, but honestly, it was a mutual decision by Dr. Fan and the students. It was a long and tiring week where we all shared shifts,” she said.

Fan agreed that the nine-day clean coal technology experiment was a success. “In the two years we’ve been running the sub-pilot plants, our CDCL and SCL units have achieved a combined 830 operating hours, which clearly demonstrates the reliability and operability of our design,” he said.

At any one time, the units each produce about 25 thermal kilowatts—that is, thermal energy, which in a full-scale power plant would be used to heat water and turn the steam-powered turbines that create electricity.

The researchers are about to take their technology to the next level: a larger-scale pilot plant is under construction at the U.S. Department of Energy’s National Carbon Capture Center in Wilsonville, Ala. Set to begin operations in late 2013, that plant will produce 250 thermal kilowatts using syngas.

The key to the technology is the use of tiny metal beads to carry oxygen to the fuel to spur the chemical reaction. For CDCL, the fuel is coal that’s been ground into a powder, and the metal beads are made of iron oxide composites. The coal particles are about 100 micrometers across—about the diameter of a human hair—and the iron beads are larger, about 1.5-2 millimeters across. Chung likened the two different sizes to talcum powder and ice cream sprinkles, though the mix is not nearly so colorful.

The coal and iron oxide are heated to high temperatures, where the materials react with each other. Carbon from the coal binds with the oxygen from the iron oxide and creates carbon dioxide, which rises into a chamber where it is captured. Hot iron and coal ash are left behind. Because the iron beads are so much bigger than the coal ash, they are easily separated out of the ash, and delivered to a chamber where the heat energy would normally be harnessed for electricity. The coal ash is removed from the system.

The carbon dioxide is separated and can be recycled or sequestered for storage. The iron beads are exposed to air inside the reactor so they become re-oxidized [to] be used again. The beads can be re-used (or recycled) almost indefinitely.

Since the process captures nearly all the carbon dioxide, it exceeds the goals that DOE has set for developing clean energy. New technologies that use fossil fuels should not raise the cost of electricity more than 35 percent, while still capturing more than 90 percent of the resulting carbon dioxide. Based on the current tests with the research-scale plants, Fan and his team say they believe that they can meet or exceed that requirement.