The record increase in U.S. crude oil production during 2012 and the significant decline in coal use for domestic electricity generation were reflected in the movement of those two commodities by rail last year. 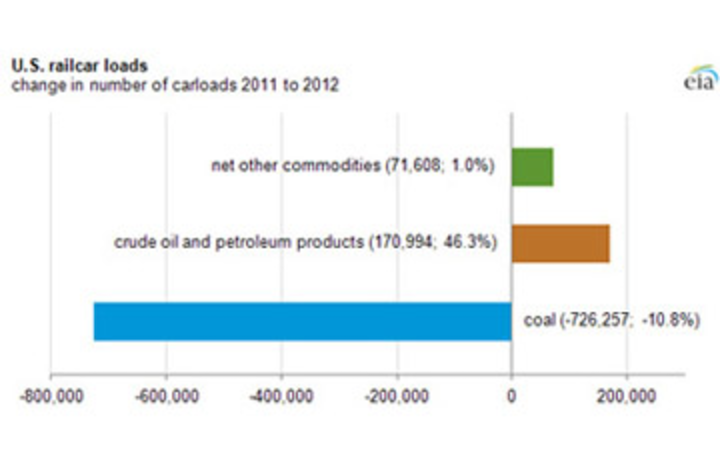 The record increase in U.S. crude oil production during 2012 and the significant decline in coal use for domestic electricity generation were reflected in the movement of those two commodities by rail last year, according to the U.S. Energy Information Administration (EIA).

Crude oil and petroleum products accounted for the biggest increase in railcar loadings among commodities in 2012, while coal had the largest decline. Notwithstanding these changes, coal remained by far the dominant category of carload shipments, accounting for 41 percent of total carloads, compared to a 4 percent share for all petroleum and petroleum products combined.

Last year, the amount of crude oil and petroleum products delivered by rail increased 46 percent over 2011, or almost 171,000 carloads, according to the Association of American Railroads (AAR), which tracks movement of commodities by rail. Crude oil accounted for an estimated 38 percent of the combined deliveries in the oil and petroleum products category during 2012, up from 3 percent in 2009. The trade group says that crude oil was responsible for nearly all of the growth last year in carloadings in this category.

Typically, about 90 percent of the crude oil and petroleum products in the United States is transported by pipeline. However, more crude is being moved by rail from areas of the country seeing a boost in oil production, such as North Dakota's Bakken Shale formation, that do not have adequate pipeline infrastructure to transport the oil to refineries. U.S. crude oil production increased by a record 780,000 barrels per day in 2012.

The commodity with the biggest decline in railcar loadings during 2012 was coal, which was down about 726,000 carloads, or nearly 11 percent, to just over 6 million carloads.