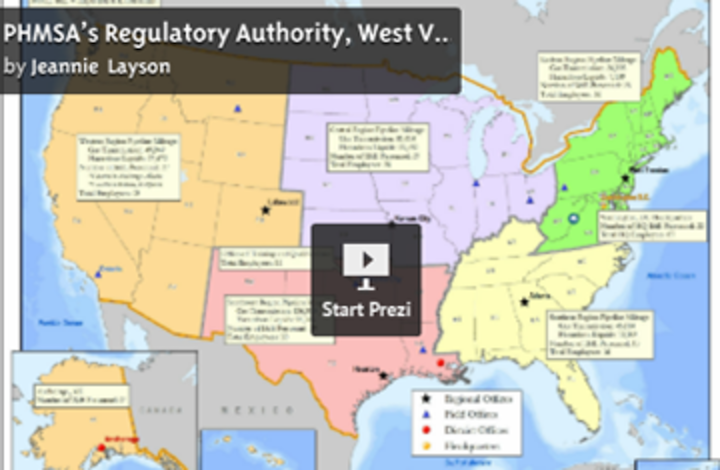 West Virginia Senator Jay Rockefeller of the Senate Commerce Committee called for the hearing earlier this month to examine the state of pipeline safety following the Dec. 11, 2012, gas transmission pipeline rupture in Sissonville that caused property damage and several minor injuries. Administrator Quarterman was invited to give testimony on PHMSA's progress in implementing the provisions of the Pipeline Safety, Regulatory Certainty, and Job Creation Act of 2011.

"While pipeline safety is improving, high-profile incidents like the one that occurred at Sissonville underscore how important it is to be ever-vigilant in preventing pipeline failures," said Administrator Quarterman, during the hearing. "We take each and every mandate and recommendation that has been issued to us very seriously, and have completed many, and have several other ongoing initiatives to provide protection to the American people and environment."

During her testimony, Quarterman enumerated actions PHMSA has taken to implement the provisions of the Act, which President Obama signed into law in January 2012, in addition to recommendations from the National Transportation Safety Board and other federal oversight agencies.

Since the Act was signed, PHMSA has hired additional federal pipeline safety inspectors, conducted a study on leak detection systems used by hazardous liquid pipeline operators, and initiated a rulemaking to update the Pipeline Safety Regulations with newly increased maximum civil penalties for safety violations. You can find these and other actions on PHMSA's new Web page, The Pipeline Safety Act:  One Year Later.

As the federal agency charged with overseeing more than 2.6 million miles of pipelines that transport natural gas and hazardous liquid across the country, PHMSA establishes and ensures compliance with safety regulations through regular inspections carried out by its 135 federal inspectors, or by state-employed agents who cover more than 90 percent of the nation's intrastate transmission and distribution pipelines. Pipelines in West Virginia are monitored by state inspectors.

Quarterman noted that thanks to provisions in the Act, PHMSA is able to finance 77 percent of state pipeline safety program costs, totaling approximately $43.5 million. "State pipeline safety agencies are the first line of defense in protecting the American public, and they have always been a critical component of PHMSA's success," she said.