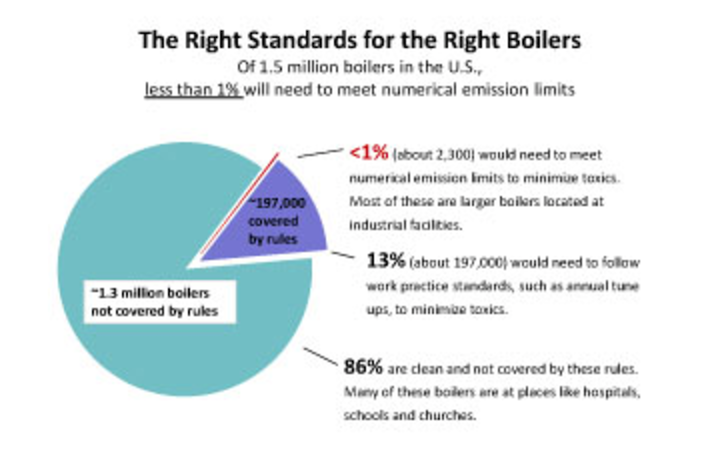 The U.S. Environmental Protection Agency (EPA) finalized changes to Clean Air Act standards for major and area source boilers and commercial/industrial solid waste incinerators. A specific set of adjustments to standards that were originally finalized in March 2011, was issued on December 20, 2012.

The EPA says the adjustments address new data provided to the agency and additional information about real-world performance and conditions under which affected boilers and incinerators operate.

Major source and affected area source boilers will have three years to comply and can be granted a fourth year if needed to install controls.

The EPA said the adjustments were made in response to multiple requests for reconsideration of certain aspects of the 2011 rules and recognize the diverse and complex range of boiler uses and fuels.

Adjusting emission limits for certain pollutants in certain categories of major boilers and CISWI (Commercial/Industrial Solid Waste Incinerators). Because the EPA followed the Clean Air Act, the changes resulted in both less and more stringent emission limits, depending on what the new data demonstrated. A detailed summary of these changes is available in the EPA’s Technical Overview Fact Sheet.

Adding to and refining the list of the subcategories of boilers that the EPA uses to provide the “right standards for the right boilers.” Each subcategory has its own list of requirements that recognizes what is achievable.

Allowing the necessary time to implement the standards by establishing the compliance deadlines for major boilers and CISWI units in 2016 and 2018, respectively. These units will have three to five years, respectively, to comply with these adjusted standards, and can do so with proven, currently available technologies, the EPA says.

Maintaining numerical emission limits for the highest emitting 0.4 percent of all boilers. These will not apply to 86 percent of all boilers in the United States because these boilers burn clean natural gas and emit little toxic air pollution, the EPA says. The rest would need to follow work practice standards, such as annual tune-ups, to minimize toxics.

To learn more about the specific set of adjustments, visit epa.gov.