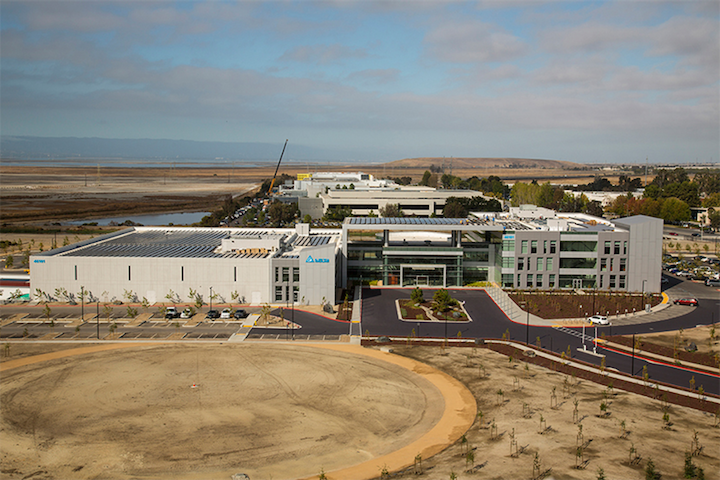 The concept of geothermal heating and cooling, which involves using the earth’s temperature, is so simple that it can be traced throughout history. In the Paleolithic era, the practice of utilizing the earth’s thermal energy was in the form of bathing in hot springs. The Romans then took it a step further by using hot springs to feed underfloor heating. By the 1940s, modern geothermal practices took shape.

Today the ability to leverage geothermal heat through the creation of ground source or water source heat pumps has been commercialized and buildings are benefiting from solutions that require little maintenance, offer greater flexibility and are three times more efficient than traditional heating, ventilation and air conditioning (HVAC) systems. A common misconception is that geothermal practices are only effective in warm climates. However, temperatures run relatively constant just a few feet beneath the planet’s surface. Despite its proven history, the practice is still considerably underused. Even as recently as 2013, less than 1 percent of the world’s heating comes from geothermal sources. Geothermal heating and cooling systems use an underground piping system, commonly referred to as a "loop," to exchange heat between a building or home, a ground source heat pump, a heat exchanger and the earth. As with any heat pump, geothermal and water source pumps are able to heat and cool a building or residence. The system is able to capitalize on the near-constant temperatures just four to six feet below people’s feet to keep occupants comfortable using energy naturally generated from the earth, which can essentially be considered free.

An additional open-loop option uses water from bodies of water as the heat exchange fluid that circulates directly through the system. Also, depending on certain variables, a hybrid system incorporating various elements from different geothermal resources may be utilized. While all of these approaches can be used for commercial and residential building projects, the best type of system to employ depends on a number of factors, including climate, soil conditions, land space and nearby water supply, as well as local codes, regulations and installation costs.

Open-loop systems tend to be less commonly used since they require an ample supply of groundwater to power the geothermal heat pump. Building projects most often employ a closed-loop system, which consists of a piping network that circulates an antifreeze-like solution. The resulting process for a closed-loop system, by which a heat exchanger transfers geothermal heat between refrigerant in the heat pump and the antifreeze-like solution in the piping system, is the same across the three different configurations.

For land with minimal space, a vertical ground-loop system may be ideal. However, if space is less of an issue, a horizontal system could prove to be more cost-effective because it requires a shallower penetration into the earth and, thus, does not require a drilling rig.

The other closed-loop option, pond/lake, can be considered if the site has an adequate body of water nearby. This system works by running a supply line pipe underground from the building to the water. While this may be the lowest cost option, water sources must meet minimum volume, depth and quality criteria for it to be viable.

Once a system type is selected and installed, the heat exchanger transfers the obtained heat to the building’s energy distribution system. For commercial buildings, this is usually through radiant in-floor and hydronic fan coils. In the summer, the process is reversed, with the heat pumps collecting the heat from within the building and moving it to the underground loop where it disperses into the cooler earth.

While a traditional HVAC system may be a more familiar concept, that doesn’t necessarily mean it’s the best option for a building. It’s important to understand the benefits offered by a geothermal system in direct comparison to standard practices. In some cases, a traditional system may be preferred, but many compelling elements of an underground system are worth exploring. 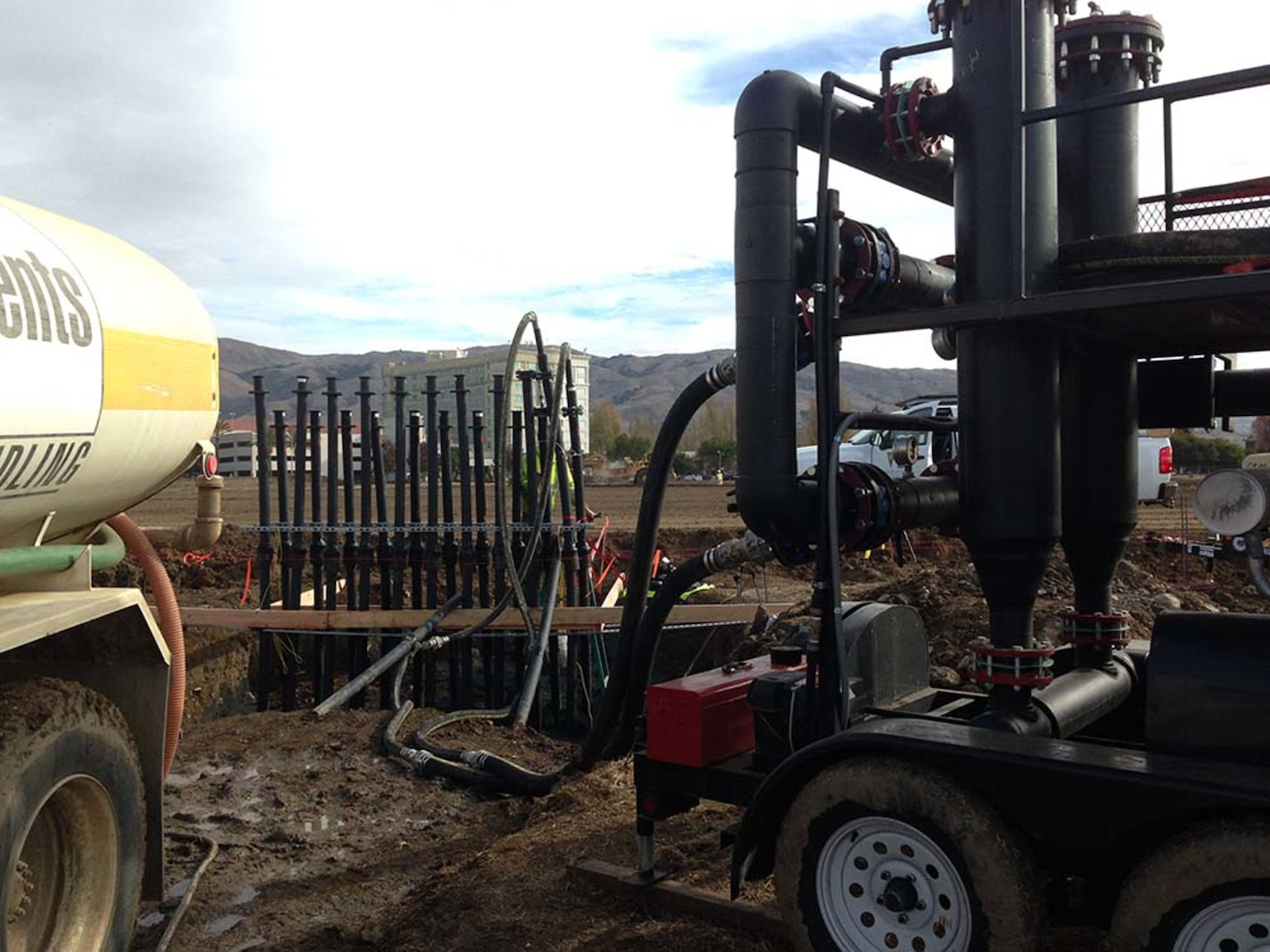 Installation of the header manifold. The systems uses 10 header pairs, each pair serves 10 borehole circuits each.

Although many may not realize it, a geothermal system is actually considered a renewable energy technology. As a result, it can play a key role in a structure’s overall energy efficiency and green practices. Geothermal heat pumps have been shown to reduce energy consumption by up to 44 percent compared to standard air source heat pumps and up to 72 percent when compared to standard air conditioning equipment.  In addition, they have demonstrated higher efficiency — up to 300 and 400 percent higher — than fossil-fueled furnaces, which operate at less than 100 percent.  This makes geothermal systems anywhere from four to six times more efficient than gas, propane or oil. Overall, these systems can save between 40 and 70 percent on heating costs and between 30 and 50 percent on cooling costs over traditional
HVAC systems.

With heating and cooling costs accounting for a significant portion of a building’s energy usage, utilizing a geothermal system to cut these costs can result in substantial savings. As further evidence, these systems have been shown to remove up to four times more kilowatt-hours of consumption from the electrical grid per dollar spent than photovoltaic and wind power add to the grid. By leveraging the abundant energy generated by the sun and stored underground, users of these systems are able to tap into as much as five units of free energy for every one unit drawn from the grid to power the system.

According to the U.S. Department of Energy, the installation price of a geothermal system can be several times more expensive than that of an air-source system. However, the department confirms that these additional costs will be recouped from resulting energy savings in as few as five to 10 years. What’s more, geothermal systems have longer life spans than conventional heating and cooling systems. Further value and return on investment comes in the form of reduced maintenance costs, with geothermal systems requiring far less upkeep than conventional systems. Not only are the parts within this system extremely durable, but some components, such as the ground heat exchanger, are also essentially maintenance-free.

In addition to energy and cost savings benefits, geothermal systems can provide more freedom in building design. Since the system leverages the nearly constant internal temperature of the earth, it can be installed essentially anywhere in the country year-round. Additionally, because of its subterranean nature, it has significantly fewer visible parts than traditional systems.  This lack of outside equipment, such as rooftop units, allows for greater freedom when making design choices and eliminates many of the less aesthetic necessities associated with a building’s operations. Furthermore, geothermal systems have the benefit of being set up in multiple zones, with each zone having an individual control room.  This allows for even more design freedom as well as additional flexibility in energy usage. In today’s building environment, green design is becoming less of an option and more of a requirement. Many designers and building owners look to push the envelope in building design, aiming for Leadership in Energy and Environmental Design (LEED) Platinum or even net zero status. Given the portion of energy consumption generated by a building’s heating and cooling systems, a geothermal system can have a significant impact in a building owner’s ability to achieve these designations. This is why a geothermal system was utilized in the creation of Delta Products’ new LEED Platinum and net zero-designed headquarters in Fremont, California.

The original plan for the 180,000-square-foot facility was to implement a vertical, closed-loop system. However, upon inspection of the site’s geology, rock and soil composition, and land availability, it was determined that the location could not meet the required depths for this type of piping structure without disrupting the water table. As a result, a horizontal system was utilized. As opposed to the vertical arrangement, which would have required the piping to reach depths of between 100 and 400 feet, the horizontal system only needed the piping to reach a depth of 30 feet. To compensate, however, the land space needed to allow for the piping network to cover a wide area, which equated approximately to the size of five football fields.

In this case, a horizontal system proved to be the best option because it used the facility’s large land space and resolved its depth issue. As mentioned previously, numerous variables must be considered before making a final decision, but the many geothermal options available makes it highly likely that there will be a solution to fit every unique need.

Developed by the United States Green Building Council (USGBC), the LEED rating system awards points for building design and construction that align with specific sustainability guidelines. Heating and cooling is a significant portion of commercial energy consumption, so it only makes sense that optimizing these operations would result in a comparable amount of LEED points. In fact, the right improvements to energy usage could gain as many as 38 points in the Energy and Atmosphere category of the points breakdown. This equates to nearly 28 percent of the 136 available points; 80 of which are required, at minimum, to achieve Platinum status.

Net zero building design presents further challenges since it requires a structure to create as much energy as it consumes. Because of this stringent requirement, these types of buildings are not yet as common as LEED-certified facilities. However, the ability of a geothermal system to considerably reduce HVAC energy consumption levels will play a key role in more readily obtaining this status. By incorporating these systems, building owners can more easily match a facility’s demand to its available energy supply generated from on-site renewable sources such as solar energy.

Although largely hidden in the physical sense, the benefits of geothermal systems are clear. Ranging from improvements in overall building efficiency to greater flexibility in architectural design, these systems are becoming impactful players in the building design and construction industries, making them worth serious consideration for current and future construction projects.

Joseph Oberle currently serves as the vice president of corporate development at Delta Products Corporation. Prior to joining Delta, Oberle was a general manager at General Electric for 25 years, working in lighting technologies and transportation.