Developments in leak detection address traditional challenges to keep methane out of the atmosphere. 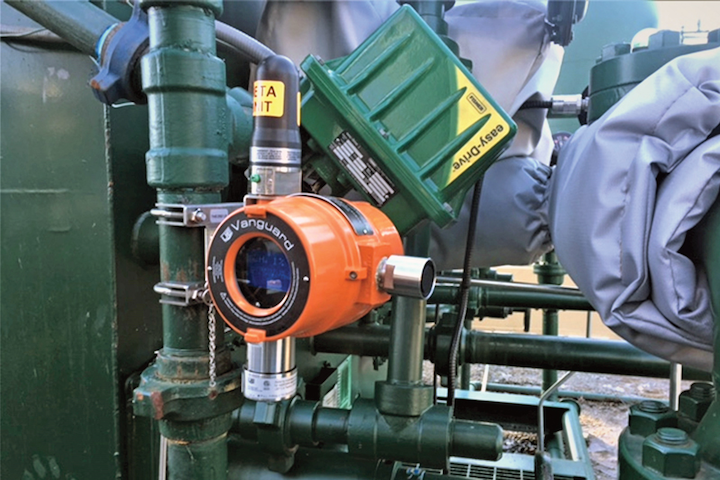 Ever since the discovery of abundant onshore natural gas resources in North America, natural gas has been dubbed a major source of clean-burning fuel. The oil and gas industry is positioning natural gas as a "transition fuel" providing the missing link in the transformation of the North American energy supply from abundant, established sources like coal, to emerging, renewable energy sources like solar and wind. In order for natural gas to burn cleaner than coal and heavier hydrocarbons, less than 2 percent of natural gas can leak from wellhead to burner tip. This is because the main component of natural gas — methane — is a potent global warming gas 25 times stronger than CO2.

All governments have recognized that reducing the loss of natural gas from wellhead to burner tip is required. The Environmental Protection Agency (EPA) operates the voluntary Natural Gas STAR program and has proposed the OOOOa New Source Performance Standards for measuring and limiting methane emission from new, reconstructed or modified assets. The Department of Energy (DOE) kicked off an Advanced Research Projects Agency-Energy (ARPA-E) program labeled MONITOR (Methane Observation Networks with Innovative Technology to Obtain Reductions) to provide funding for next-generation methane detection methods. Canadian government programs are also in place to develop methods and metrics as well as provide funding for industry to address this issue head-on, particularly in Alberta. The Environmental Defense Fund (EDF) commenced its own version of MONITOR focused on a more immediate solution called the Methane Detectors Challenge. Also, an oil and gas industry group called ONE Future has proposed its strategy for moving forward in reducing methane emissions in a data-driven and industry-conscious way.

Conversely, there are still others in the oil and gas industry who insist this is not a problem that needs to be addressed because the net benefits of natural gas vastly outweigh the detractions of methane emissions. But based on the actions of most stakeholders on both sides of the coin, it seems clear that preserving the positive potential of natural gas as a viable alternative or transition from traditional fossil fuels requires minimizing the disproportionate potential damage caused by methane emissions from assets in the natural gas value stream.

The massive scale of the natural gas value stream presents a significant challenge to keeping methane out of the atmosphere. Traditionally, natural gas operators have relied on human auditory, visual and olfactory (AVO) methods for detecting leaks, which presents challenges.

"AVO methods are challenging given that most natural gas is colorless and odorless, and the loud sound a gas leak might produce is often obscured by noise from other equipment on-site, hence why specialized equipment such as optical gas imaging (OGI) is commonly used to detect leaks," said Michael D’Antoni, vice president of GreenPath Energy Ltd, an emissions management service company in Calgary, Alberta, Canada, experienced in leak detection and measurement. "It’s not impossible to detect leaks via AVO, but it’s really hard."

Presently, two of the most commonly applied methods used in emissions programs are EPA method 21 and optical gas imaging (OGI). EPA method 21 specifies having a trained expert use handheld analytical gas measurement equipment — commonly referred to as a sniffer — to check all potential leak points. OGI cameras are becoming the preferred method by companies like GreenPath Energy and rely on infrared technology to detect temperature difference between the methane emission and the background, making leaks "visible" to the trained expert. Current leak location programs will specify how and how often individual assets must be evaluated. In many cases, they follow strict rules set forth by the EPA and state-level regulators with inspection frequencies using comprehensive methods ranging from annual to quarterly or not at all. 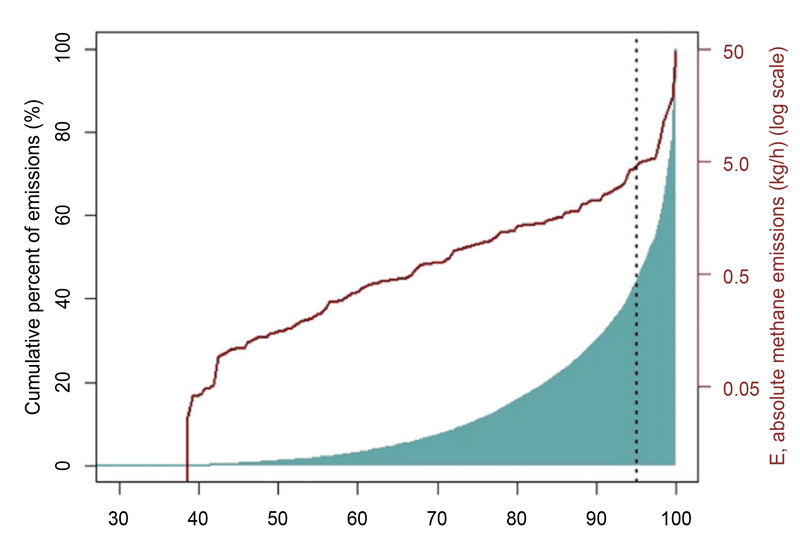 Either EPA method 21 or OGI can be effective at locating the source of leaks, but they both require a trained expert using sophisticated equipment on-site and at significant expense. As such, they do not scale up easily, so as the natural gas value stream grows — as it inevitably will — deploying trained professionals to cover the regular inspection of all assets all of the time using current methods becomes prohibitively expensive. Another limitation of current methods is that they take place at regular intervals, not 24/7. A leak that occurs between inspection intervals could introduce a significant amount of damaging methane into the air before it is discovered, especially if it were of significant size, such as one created if a thief hatch on a tank was left open accidentally.

To compound this, most experts agree that not all assets in the industry are leaking. It is widely accepted that the industry contains "super emitters," which are large leaks responsible for more than 80 percent of all emissions and constitute less than 20 percent of leak sources in production. Adding procedures and lean operations can help keep detection costs to a minimum, but if the goal is to truly minimize the methane emissions so natural gas can fulfill its role in North America’s energy mix, more must be done.

At a high level, the leak management process is fairly simple: The leak occurs, a trained expert does a survey that detects and locates it and a maintenance crew repairs. The timeline from "leak occurring" to "leak fixed" is extended mostly by the time it takes to have an expert on-site. Expert visits are usually based on a regular interval as part of a preventive style maintenance inspection, and trying to increase the amount of expert attention by shortening the interval only adds more cost.

The key is to separate the process of detecting a leak from the process of locating it. Leak detection requires a notification when the presence of gas in the air has surpassed a designated threshold — an indication that something is out of the ordinary. The effectiveness of leak detecting depends on the frequency of monitoring and where it would be best to have someone there monitoring all the time, yet few can afford this luxury. But today, modern industrial automation instrumentation is fully capable of 24/7 air-quality monitoring, and long-range telemetry can send data over almost any distance. Once the leak is detected, the manual job of pinpointing the exact leak location can begin by comprehensive methods such as OGI.

Leak locating is a nonrepetitive, sometimes subjective, and often difficult process. It will likely be five to 10 years before technology that can pinpoint leak location can match the ability of a trained expert with an OGI camera or another device. Once the leak is detected, data could then be sent directly to a company like GreenPath Energy, which could mobilize their workforce to pinpoint the location so that maintenance can fix it.

"Given that leaks can occur at any time at any location, continuous monitoring would be best, but is currently cost prohibitive," said D’Antoni. "The most effective solution is to send trained experts to the site only when a leak has been detected, which can theoretically reduce the requirement for inspections on mandated intervals. The large leaks will get detected when they occur instead of on a regulated schedule. Regardless of the monitoring method employed, there must still be a system to dispatch the technician, confirm and pinpoint the leak and provide repair recommendations or repair on-site if possible. Optimally, the repair would involve a combination of automated instrumentation and human intervention."

Wireless gas detectors can be installed at as little as one-third the cost of a wired system.

The first generation of automated gas detectors was wired into designated locations across a facility. But the larger the site, the less economical it is to design, purchase conduit and wiring, and install the system. Even though the wired solutions provide 24/7 monitoring, they can only do so in a limited number of locations. However, recent developments in wireless communications and energy-efficient battery-powered transmitters have made it cost-efficient to have many different detection points. Wireless detectors can be installed at as little as one-third the cost of a wired system.

Also, using wireless transmitters based on open, nonproprietary communications protocols, such as WirelessHART, adds more cost savings and flexibility. HART is the most commonly used industrial protocol, which means that many companies will already have networks in place, making it easier to plug in for secure data transmission. The fact that modern battery-powered transmitters can run up to five years without needing to recharge the battery reduces costs further by simplifying maintenance and installation. Additional benefits of modern wireless transmitters include easier calibration, ability to change batteries and sensors in classified areas without a hot work permit and universal mounting.

Unleashing the potential of natural gas

As the use of natural gas continues to grow, the need to minimize leaks in storing and transporting will grow with it. The current system for detecting, locating and fixing is not cost effective for the operator. Separating the tasks of detecting leaks and locating leaks makes it easier to automate the detection process so that the more time-consuming process of locating the leak can be used only when triggered. As more companies adopt this process, the result will be a cleaner environment and safer, more economical natural gas operations.

Andrew Liptak is a product manager at United Electric Controls. He is responsible for management and growth of the gas detection product line. Liptak is experienced in developing products based on voice of the customer, and he has participated in several R&D projects from inception to launch. Liptak holds a Bachelor of Science in chemical engineering from Rensselaer Polytechnic Institute in New York.