With a centrifuge system, a Kentucky brewery was able to achieve more throughput by not allowing the brew to settle in fermenters. 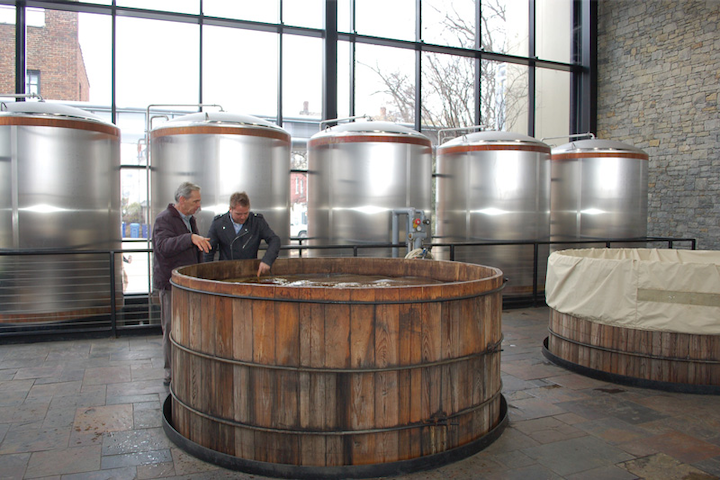 Alltech’s cypress wood tanks hold fermented whiskey wash that is about 8 percent alcohol. From the tanks, the wash moves to the wash still in which it is heated, vaporized and condensed to become 23 percent alcohol.

Two years ago, a Lexington, Kentucky beer brewery and bourbon distillery was wasting product using a filtering process that was inefficient for production and ineffective in producing the quality it demanded. The company installed separation technology that it allowed it to produce more product of higher quality in a shorter period of time.

An hour away from 95 percent of the world’s bourbon brewers, Alltech Lexington Brewing & Distilling Co. is a unique stop on the world-famous Kentucky Bourbon Trail. Alltech is one of a handful of joint brewing and distilling operations in the world.

The site is home to Town Branch Distillery and a brewery that produces the Kentucky Ale family of beers. It is the oldest craft brewery in Lexington. Alltech founder and president Dr. Pearse Lyons acquired the 200-year-old Lexington Brewing Company in 1999 and resurrected the Lexington brewing and distilling tradition that dates back to 1794.

In the fall of 2011, ground was broken on Town Branch Distillery, which was added to the Kentucky Bourbon Trail in 2012. Today the distillery produces Town Branch Bourbon, Town Branch Rye, Bluegrass Sundown liqueur, Kentucky Ale, Kentucky Kölsch and Pearse Lyons Reserve, the first malt whiskey produced in Kentucky since Prohibition. 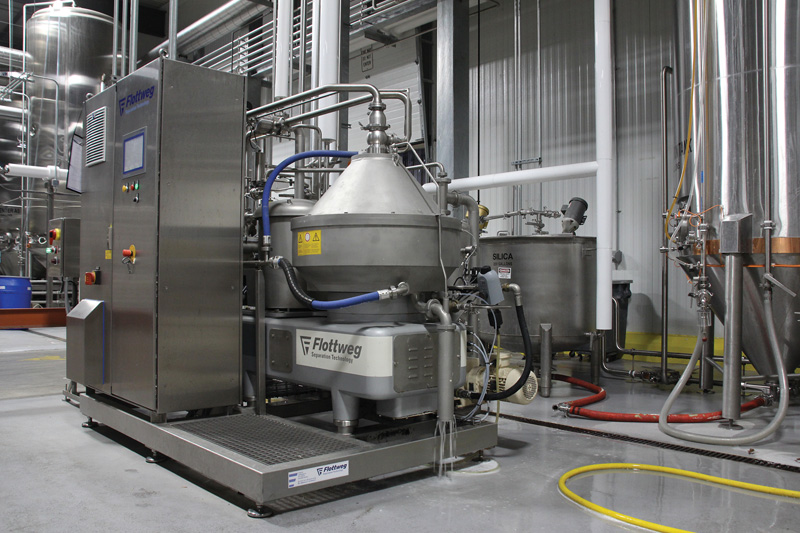 The centrifuge system separates the liquid and sends it to a holding tank before filtration.

The centrifuge system separates the liquid and sends it to a holding tank before filtration.

Alltech is famous for aging its brew in bourbon barrels. "A honeymoon goes on and whatever is in that barrel becomes a part of the beer," said Alltech master brewer Ken Lee.

Alltech’s main business is animal nutrition, producing animal supplements through fermentation. But the brewing arm of the company has grown substantially in the past decade.

"When I first came to Alltech nine years ago, they made 3,800 barrels each year," Lee said. "Now we brew more than 40,000 barrels a year and are opening another brewery and distillery in Pikeville, which will be brewing beer with an identical system as the one we have here in Lexington."

Two years ago, Alltech experienced an issue with processing time constraints and decided to try installing a centrifuge system. The company discovered that with a centrifuge, it could achieve more throughput and yield than by using a filter or letting the brew settle in fermenters.

Alltech was using a small filter that broke down frequently because of the yeast. "We were losing beer," said brewer Mitchell Pace. "So we decided to try the Flottweg separation technology." 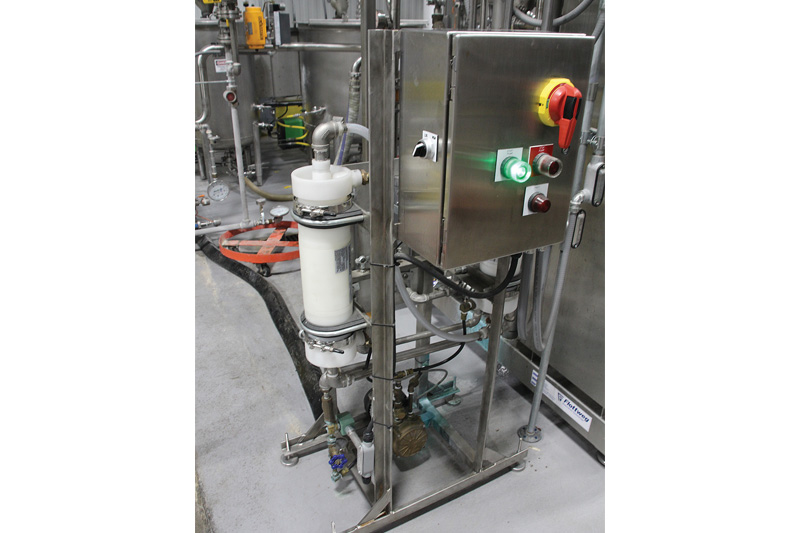 The centrifuge equipment helps with temperature control and clarity and minimizes pressure out of the cooler because the yeast has been removed.

The centrifuge equipment helps with temperature control and clarity and minimizes pressure out of the cooler because the yeast has been removed.

"This centrifuge system is very important to our operation," Pace said. "Almost everything we do goes through this separation technology."

The equipment has been installed for two years without any major issues, Pace noted. "It helps with temperature control, clarity and our barrels coming out of the cooler don’t have as much pressure on them because the yeast has been removed. Using this technology is very good for the barrels and the aging process. The machine helps us maintain our necessary volume. It saves hours, money and headaches. As with any new equipment, we had some kinks in the beginning, but Flottweg was right here to help us work through that and learn how to operate it effectively."

Pace said the only maintenance required is an occasional hard reset when the machine has been running nonstop for a while. "This system is so easy to operate," according to Pace. "You simply press the start button, press the pause button, press the stop button — that’s pretty much it. The CIP process is built in. Once you are finished with a run, you can press the ‘clean’ button then ‘OK,’ and boom — it goes into cleaning. It discharges itself. It allows us to produce more product because no time is wasted on the process." 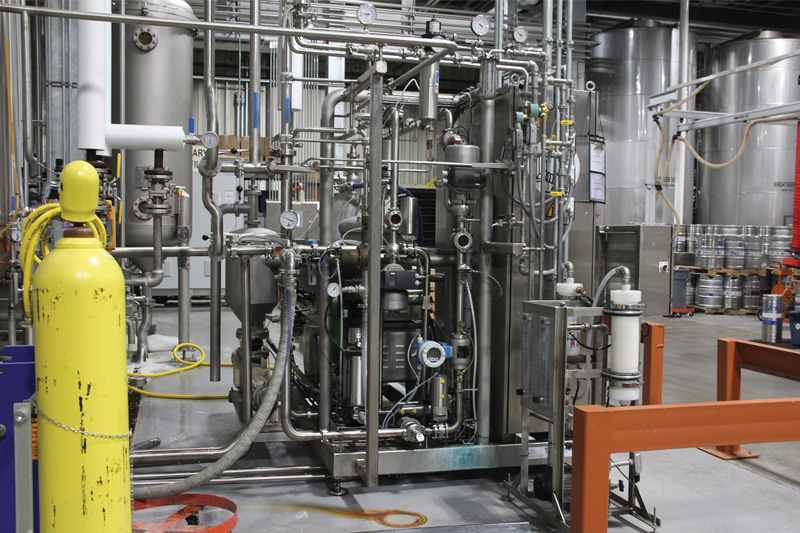 Using this centrifuge technology is good for the barrels and the aging process. It helps maintain the necessary volume while saving hours, money and headaches.

Using this centrifuge technology is good for the barrels and the aging process. It helps maintain the necessary volume while saving hours, money and headaches.

The centrifugal separators are used for separating solids from liquids, thereby permitting highly efficient clarification. The product to be clarified runs through a stationary infeed pipe to the interior of the bowl and is gently accelerated by the distributor to the full speed of rotation. The disc stack in the bowl causes the product stream to be divided into many thin layers, creating a large surface area.

The solids are separated from the liquid within the disc stack. The high centrifugal force makes the solids that are separated out collect at the edge of the bowl. A hydraulic system in the base of the bowl periodically ejects the separated-out solid at full speed of rotation. The clarified liquid flows out of the disc stack into the impeller, which discharges the liquid under pressure.

Solids are emptied from a separator using a discharge system. This system enables extremely quiet self-emptying of the separator bowl.

The pipes are clearly marked to indicate where beer comes in and where it comes out. A fermentation vessel is charged with carbon dioxide to ensure no oxygen gets in. The beer passes through the piping and makes its way into the centrifuge. The system reads the turbidity and settings can be established based on which product is being produced. Production is monitored through two site gauges with backlighting so the beer can be seen coming in. From there, it goes into the centrifuge bowl through piping. As the beer flows in, it throws the debris against the sides of the bowl and the separated beer can be seen in the other site gauge. Any hops, debris or yeast is discharged from the side chamber. 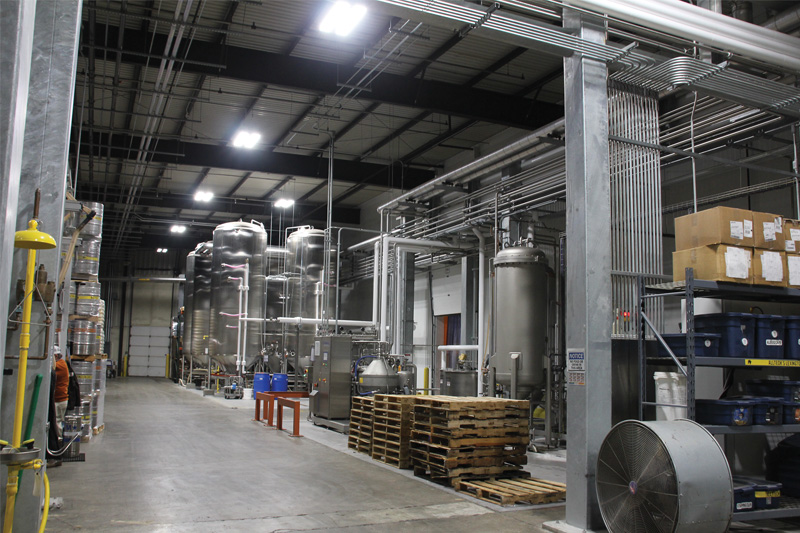 This site is home to Town Branch Distillery and a brewery, which produces the Kentucky Ale family of beers.

This site is home to Town Branch Distillery and a brewery, which produces the Kentucky Ale family of beers.

The operator can check the turbidity (European Brewery Convention [EBC]) at any time to make sure it is within specification. If it is hazy, the system can reroute and send the liquid back through until the end goal is achieved. When the system confirms the correct turbidity (EBC), it sends the liquid back through the discharge pipe and pulls a sample that can be quality checked. The separated liquid makes its way to the exit pipes, which flow directly into the tanks. This is the part of the process that prepares the product for shipping.

Since installing the separation technology, life has been easier for Pace and his team of operators.

"Today, I’m running 14,000 gallons of beer," said Pace. "Without this machine, we would probably lose 5,000 gallons, and it would take 48 hours, at least. This separation technology saves money, time, and headaches. The beer spins really fast at 6,700 rpm and sends the yeast to the ground. The beer goes to a stabilization tank with less yeast. Since we started using this machine, life is just better."

Christian Pettit is the sales manager for Brewing, Distilled Spirits and Wine for Flottweg Separation Technology Inc. He holds a mechanical engineering degree and has 14 years of centrifuge experience, including stents in the service department, process engineering and sales. He can be reached at cpettit@flottweg.net.

The importance of accurate flow measurement in industrial processes

Thermal efficiencies can be maximized when the type of process and fluid viscosities are considered.
Matt Hale
Feb 25th, 2019

Given the much higher viscosity of chocolate, it is likely that at least a 3-inch Coriolis mass flowmeter will be needed.
David W. Spitzer
Sep 11th, 2018

How will the food and beverage industry grow in 2018?

Most flowmeters are affected in some way by viscosity.
David W. Spitzer
Sep 21st, 2017

When someone asks for or cites the viscosity of a fluid, it is prudent to ask for the composition and temperature to which it applies.
David W. Spitzer
Sep 14th, 2017