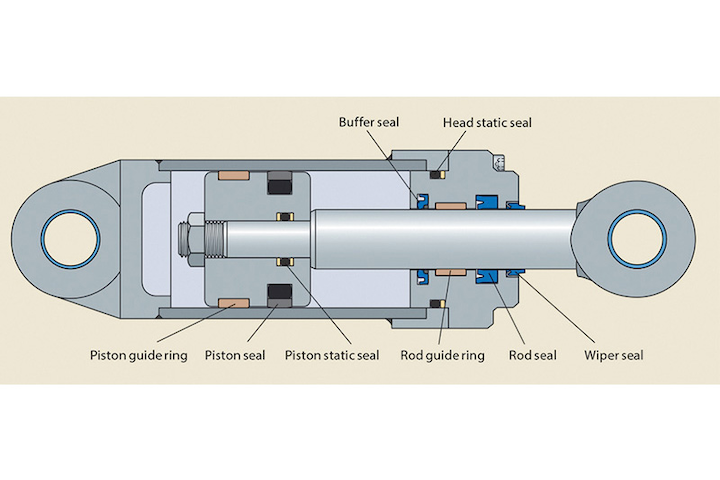 Fluid power systems in which the working fluid is liquid (instead of air) rely on hydraulic cylinders to push and/or pull a load or selectively resist motion under load using fluid pressure. Hydraulic cylinders, in turn, depend on seals to close gaps between various cylinder components (such as pistons and cylinder bores and rods and head glands) for optimized system performance. These seals are expected to hold hydraulic pressure, withstand wide temperature ranges, and be compatible with hydraulic fluids.

With hundreds of different hydraulic seal designs and material combinations — and existing innovations and those in the pipeline — an understanding of the basics can help point the way toward the appropriate sealing technology for an application.

Hydraulic seals fall into one of two categories: dynamic or static.

Each dynamic seal in a hydraulic cylinder performs practical functions:

Piston seals act as pressure barriers and prevent fluid from passing the piston (important for controlling the
cylinder motion, maintaining position and holding a load).

Rod seals act as pressure barriers and keep the operating fluid inside the cylinder, regulate the fluid film that extends with the surface of the piston rod (important to inhibit rod corrosion and to lubricate a wiper seal and the rod itself) and accept the lubrication film back into the cylinder when the rod retracts.

Wiper seals exclude external contaminants from entering a cylinder assembly and the hydraulic system and accept the lubrication film back into the cylinder when the rod retracts.

By comparison, static types seal between components fixed together without relative motion. Hydraulic cylinders use static seals in numerous locations, depending on the cylinder’s design and construction. The most common are static seals between the piston and piston rod and between the head and cylinder bore tube.

Selecting the appropriate hydraulic seal material and profile is governed largely by application parameters. Among the application considerations are:

Included in the overall "wish list" of material properties for consideration are:

In general, the world of seal materials is populated by the major polymeric material groups (with modifications and special grades always possible to meet the requirements of an application). The most common materials considered for hydraulic seals include:

In addition, innovative material variations have expanded the portfolio of sealing technologies. As examples, bonding urethane to PTFE and other rigid plastics has demonstrated improved performance at high pressures, temperatures and speeds, while bonding thermoset materials to PTFE and other plastics can enhance sealing capabilities and extend a seal’s service life.

Fluid compatibility a ‘must’

The fluids used in various hydraulic systems consist of formulated chemical compositions and viscosity grades consistent with an application. While mineral oil-based fluids with various additives represent the most commonly used media in hydraulic systems, alternative fluids may be encountered.

A notable example is an increasing use of biodegradable fluids. However, these fluids are more susceptible to entrained water and most seal-grade urethanes will fail from hydrolysis when exposed to high temperature, water or humidity. As a solution and performance upgrade, hydrolysis-resistant urethanes have been introduced.

Because fluids essentially vary by manufacturer, types of additives and contaminant levels, careful consideration should always be taken to ensure compatibility between the fluid and all seal materials (as well as the temperature and mechanical loads on the seal material). A best practice is testing the compatibility of a seal in the actual fluid and under actual operating conditions.

Sealing technologies for fluid power applications will continue to evolve in response to advances in technology and the demands imposed by applications. These demands include increased operating pressures, wider temperature ranges (higher and lower), more aggressive system fluids and longer expected service life, among others. Innovations in hydraulic seal solutions will follow.

Scott Barth is business development manager for Hydraulic Seals at SKF USA Inc. He can be reached at scott.barth@skf.com or 801-973-9171.